This study established a WGS-based method to analyze viral sequences by extracting non-human gene sequences from WGS data of 10,585 individuals and identified 14 viruses that are widely present in the Chinese population, such as fingerprint virus, herpes B virus, human endogenous retrovirus, human adenovirus C, and hepatitis B virus.

The highest detection rate was for Anellovirus, with fingerprint virus genetic sequences including TTV (Torque teno virus) and TLMV (TTV-like mini virus) found in 76.7% of individuals; HHV-4 (Human gammaherpesvirus 4, EBV) was detected in 30.3% of individuals, higher than that reported in the European population cohort (14%).

Most monitored virus – Hepatitis B virus

The team further investigated whether there is a correlation between viral infection and genetic variation through genome-wide association studies (GWAS). The results showed that a missense mutation in the ACR gene was significantly associated with HHV6 viral carriage, and the locus was enriched in East Asian populations.

HHV6 belongs to the betaherpesviruses and includes two viruses with up to 90% genomic sequence identity, HHV6A and HHV6B. Although HHV6 infection is harmless to most people, studies have also found that HHV6 infection is associated with neurological diseases such as multiple sclerosis and Alzheimer's disease, indicating the potential harmfulness of HHV6 infection cannot be ignored. This insight provides an important database for future studies on the transmission mechanism of HHV6 virus, as well as genetic risk assessment of populations in regions with a high risk of HHV6 infection.

In summary, this study systematically investigated the blood viral group in a large-scale population using in-depth WGS data based on BGI's proprietary DNBSEQ sequencing platform and analyzed the population carriage rate, viral abundance and geographic distribution of 14 viruses. It was found that EBV detected in 30% of individuals was the most frequent pathogenic virus carried in the population, HBV viral abundance in blood was associated with integration events, and the missense mutation in ACR was significantly associated with HHV6 virus carriage. These findings will provide important information for viral infection prevention and epidemiological studies. At the same time, it also provides references and lessons for larger population genomic projects.

This study is based on the China Metabolic Analysis Program (ChinaMAP). This study follows relevant regulations related to biological and medical research and has been approved by the BGI Ethics Committee and relevant ethics committees of research partners.

BGI Genomics, headquartered in Shenzhen China, is the world’s leading integrated solutions provider of precision medicine. In July 2017, as a subsidiary of BGI Group, BGI Genomics (300676.SZ) was officially listed on the Shenzhen Stock Exchange.

The blood virome of 10,585 individuals from the ChinaMAP 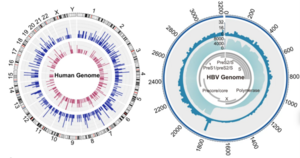 Integration sites of hepatitis B virus on the human genome