Light! We rely upon it in everyday uses and in various applications. Sunlight, candles, light bulbs, light-emitting diode (LED) lamps, etc. are just a few to name sources which illuminate objects for us to inspect surroundings and investigate the world. Those light sources differ in their properties and structure. Whereas the sunlight is incoherent, laser sources produce the so-called coherent light, i. e. when the light displays not only the same color, but also the same phase. For everyday uses, humans employ incoherent light illumination, but for scientific and industrial applications, light sources (preferably) must be coherent.

Not every configuration of the laser light coming from the source exhibits this behavior. If we create laser light with some structure, one can overcome the diffractive spreading of the laser light. Such structured illumination has its own name within electromagnetics - nondiffractive beams; laser-structured beams that are resistant to diffraction. They do not spread as they propagate and preserve their internal structure. This internal structure is known as the beam profile. The most well-known example of non-diffracting beams is the so-called Bessel beam, i. e. its focus is extended and looks like a needle. If we look at it on the white paper sheet, we see a central bright spot surrounded by concentric rings. The second example of nondiffracting beam is the so-called Airy beam, which is not only nondiffracting but also propagates not along a straight line. Actually, in can propagate along a variety of different curved paths - parabolic, hyperbolic, reciprocal, etc.

Laser illumination is usually generated and controlled using lenses. Nondiffracting beams are quite different when compared to the common laser light spots, so they require specific photonic elements for their creation and manipulation. Bessel beams are created using axicons also called conical prisms. Beams similar to the laser pointer are created, controlled, and managed using surfaces enclosed by concave parabolic shapes. Airy beams usually do appear after glasses with cubic and other enclosing surfaces. Generally speaking, we require solid glasses with prescribed surface shapes that perform the required phase-forming function. This scientific approach might in some cases result in both bulky elements and complicated fabrication processes.

Solution to this problem is the introduction of the so-called Fresnel elements, where the part of the glass volume which does not contribute to the phase function is removed from the photonic element. A good example are Fresnel lenses seen in lighthouses around the world. In a similar fashion scientists create flat photonic elements, where subtle changes in the surface (or volume) structure realize the phase delay which is required to create specific laser structured light.

These advances do enable us to engineer custom focal spot structures also called caustics, which can be further employed for specific purposes. One of such specific purpose is the structured illumination in various imaging, object inspection or recognition tasks. Conventional imaging is performed using conventional lenses and shapes of light. But what will happen if structured light illuminates objects in an imaging scenario? This is the question that scientists from the Center for Physical Sciences and Technology, FTMC (Vilnius, Lithuania) have asked themselves.

In their latest effort, R. Ivaškevičiūtė-Poviliauskienė and co-workers has investigated the generation and performance of terahertz (THz) structured light created using flat photonic elements in the inspection of objects and 2D materials.

The THz range of electromagnetic waves, which frequencies are 1000 times higher than that of the operation of mobile phones, has numerous advantages over the visible range of frequencies and a growing number of applications. First of all, flat photonic elements can be easily created using a laser ablation with femtosecond high-power pulses. A relatively large wavelength of the THz radiation makes inspection of photonic elements easy and enables for non-intrusive imaging of relatively large objects common in the everyday life. Much more importantly, photonic elements are cheap and easy to produce and due to the scaling of the wavelengths results are easily transferable to other wavelengths of electromagnetic radiation. Moreover, THz light displays attractive feature to propagate in dielectric substances, thus it can serve as convenient and non-destructive tool for security or medical aims.

One of the most important parameters in photonic imaging is the resolution and the contrast; first meaning the finesse of structures and objects we can recognize in the image and later being an indication how good the image can be resolved from the background signal. Surprisingly, the structured nonparaxial illumination consistently outperformed the conventional nonstructured illumination offering better contrast and resolution.

Conventional imaging can increase resolution by using bulkier high numerical aperture lenses. In this work, the authors have revealed how to increase those THz imaging characteristics without going to higher numerical apertures. Moreover, it was demonstrated that an illumination created using cubic phases might be superior to that one created with linear phase elements, though the differences are subtle and certainly require a second look.

Nondiffracting electromagnetic radiation is known for its ability to self-heal and reconstruct after being met with an obstacle. But what about illuminating objects behind an obstacle in imaging scenarios? As Airy illumination has a self-accelerating bending propagation trajectory, it was expected to observe its ability to illuminate an object behind an obstacle, e. g. to see an object placed behind the corner. The team was surprised that another nondiffracting illumination could keep the pace in this competitiveness benchmark - the Bessel beam was also potent performer in this task. So both structured non-paraxial illuminations can indeed see around the corners!

Lastly, the team has showcased the ability of structured illumination to distinguish between the optical properties of semitransparent layers of nanomaterials placed on a silicon wafer. For this purpose, they used five different samples with different numbers of graphene layers. As this promising 2D material is deposited on Si substrate which is transparent to THz light and interacts with the wafer. This interaction leads to a variety of effects, like electron depletion, mechanical strains, etc. All those things that happen to graphene influence its optical properties, which can be nicely resolved employing features of THz structured light. Simulations indicated further possible exploration tracts in applying such a THz light engineering approach in other imaging scenarios.

Let there be light! Not only for everyday purposes and in various applications, but also in the invisible range enabling us to reveal hidden features of opaque objects and inspect properties of innovative materials.

Race to finer and better imaging with structured terahertz light 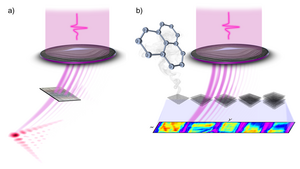 Figure 2 | An artist depiction of Airy beam self-healing and its ability of imaging 2D nanomaterials.