A research team co-led by a scientist at City University of Hong Kong (CityU) has developed a novel antenna that allows manipulation of the direction, frequency and amplitude of the radiated beam, and is expected to play an important role in the integration of sensing and communications (ISAC) for 6th-generation (6G) wireless communications.

The structure and characteristics of traditional antennas cannot be changed once fabricated. However, the direction, frequency, and amplitude of the electromagnetic waves from this new-generation antenna, which is called a “sideband-free space-time-coding (STC) metasurface antenna”, can be changed through space-time coding (i.e. software control), enabling great user flexibility.

The key to this innovative feature is that the response of the metasurface (artificial, thin-sheet material with sub-wavelength thickness and made of several sub-wavelength meta-atoms) can be changed by switching the meta-atoms on its surface between radiating and non-radiating states, like turning on and off switches, by controlling the electric current. This allows the STC metasurface antenna to realize complicated wave manipulation in the space and frequency domains through software control, and to create a desired radiation pattern and a highly directed beam.

Professor Chan Chi-hou, Acting Provost and Chair Professor of Electronic Engineering in the Department of Electrical Engineering at CityU, who led the research, highlighted that the antenna relies on the successful combination of two research advances, namely amplitude-modulated (AM) leaky-wave antennas and space-time coding techniques.

Dr Wu Gengbo, postdoctoral fellow in the State Key Laboratory of Terahertz and Millimeter Waves (SKLTMW) at CityU, first proposed the new concept of AM leaky-wave antennas in 2020 in his PhD studies at CityU. “The concept provides an analytical approach to synthesize antennas with the desired radiation patterns for different specific uses by simply changing the antennas’ shape and structure,” explained Dr Wu.

But as with other antennas, once the AM leaky-wave antenna is fabricated, its radiation characteristics are fixed. At about that time, Dr Dai Junyan, from a research group led by Academician Cui Tiejun and Professor Cheng Qiang, from Southeast University at Nanjing, China, who pioneered STC technologies, joined Professor Chan’s group at CityU. “Dr Dai’s expertise in space-time coding and digital metasurfaces to dynamically reconfigure antenna performance added a new, important dimension to the antenna research at the SKLTMW,” said Professor Chan, who is also Director of the SKLTMW at CityU.

Moreover, the time modulation of electromagnetic waves on metasurfaces usually generates unwanted harmonic frequencies, called sidebands. These sidebands carry part of the radiated electromagnetic wave energy and interfere with the useful communication channels of the antenna, leading to “spectrum pollution”. But Professor Chan and his team proposed a novel design, which makes use of a waveguide (a line for transmitting electromagnetic waves by successive reflection from the inner wall) and successfully suppressed the undesired harmonics, achieving a high-directivity beam and enabling secure communication.

“With the AM leaky-wave antenna and space-time coding technologies, we achieve the designated radiation characteristics by controlling the on-off sequences and duration of the ‘switches’ on the antenna through software,” said Professor Chan.

“A high-directivity beam can be generated with the new antenna, allowing a wide range of radiation performance without having to redesign the antenna, except for using different STC inputs,” added Dr Wu.

The energy from the radiated beam of the STC metasurface antenna can be focused to a focal point with fixed or varying focal lengths, which can be used for real-time imaging and treated as a type of radar to scan the environment and feedback data. “The invention plays an important role in the ISAC for 6G wireless communications,” Professor Chan explained. “For example, the radiated beam can scan a person and create an image of the person, allowing mobile phone users to talk to each other with 3D hologram imaging. It also performs better against eavesdropping than the conventional transmitter architecture.”

The findings were published in the prestigious journal Nature Electronics under the title “Sideband-Free Space-Time-Coding Metasurface Antennas”.

“Without the collaboration and complementary expertise of the two research teams at CityU and Southeast University, we could not have achieved these research results,” Professor Chan continued. “We hope that the new-generation antenna technology will become more mature in the future and that it can be applied to smaller integrated circuits at lower cost and in a wider range of applications.”

The research of the CityU team was supported by the Hong Kong Research Grants Council, under the Theme-Based Research Scheme, and the Guangdong-Hong Kong Joint Laboratory for Big Data Imaging and Communication. 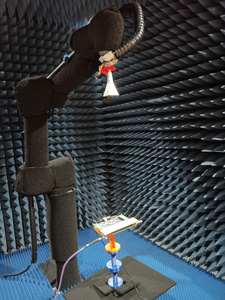 The radiated beam of the STC metasurface antenna 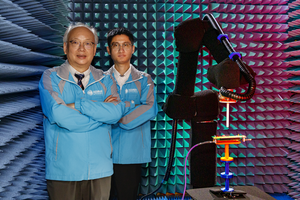