Water cycle is an important part of Controlled ecological life support system (CELSS), which involves the supply of drinking water and plant irrigation water, and the recycle of urine, sanitary waste water, and air condensate water. Using urine and sanitary wastewater for plant culture is an effective way of wastewater reuse, but there are three main challenges. Firstly, some salt content in wastewater especially sodium chloride is high, but it is not necessary for plant growth and may inhibit plant growth. Secondly, the wastewater contains organic components such as surfactants, which also has a negative impact on plant growth. Thirdly, if wastewater is used as the main nutrient source, the proportion of mineral elements in wastewater might be inconsistent with the proportion of plant growth needs, which will also affect the normal growth of plants. In a research paper recently published in Space: Science & Technology, Liangchang Zhang verified the feasibility to reuse the treated wastewater (including sanitary wastewater and urine wastewater) as a plant hydroponic medium.

Two kinds of crops, apium graveolens Linn (celery) and mesembryanthemum cordifolium L.F. (cordifolium) were selected in this study, which showed good salt tolerance in previous research. Celery was cultivated in box A and C, while cordifolium was planted in box B and D. For box A and B, the plants were cultivated with reused medium, and for box C and D, Hoagland nutrient solution was used.

As shown in Figure 1, the celery cultivated in reused medium exhibited severe yellowing and wilting in the first 23 days; a concentrated liquor of micronutrient elements was added into the circulation tank of the corresponding cultivation box on the 24th day to promote microelement concentration to the same level of Hoagland medium. Then, the celery sprouted new green shoots on the 32nd day, and the appearance restored completely on the 43rd day. As same as celery, the cordifolium grown in reused medium showed a microelement shortage symptom that many leaves turned to gloomy yellow green, and the cordifolium appearance return normal after supplementation with the concentrated micronutrient liquor. The nutrient solution supplement was shown in Table 3. Over the whole growth periods, the celery and the cordifolium could be cultivated using the recovery wastewater with micronutrient elements replenishment, furthermore, the cordifolium cultivated in reused medium showed better performance than that in standard Hoagland nutrient solution.

Micronutrient element concentration in the four hydroponic media was shown in Figure 4. The B and Zn concentrations could meet the requirements of the normal crop growth in the whole experimental stage. After pH adjustment, the micronutrient elements concentrations in Hoagland nutrient solution were significantly increased, and the growth of cordifolium plants was return to normal (Figure 1). So, to maintain crop growth in Hoagland medium, it is necessary to prevent sedimentation by pH adjustment.

The height of the plants (shoot part) was recorded after the harvest as shown in Figure 5, and Table 5 the biomass weight of all crops harvested in the experiment. The cordifolium plants produced more biomass than celery in one growth cycle. Therefore, it could be concluded that cordifolium was more adaptable to the reused medium.

Figure 6 showed the weight of macronutrient elements and NaCl in shoot dry mass (SDM) and root dry mass (RDM). The two crops showed different NaCl absorption capacity, and the crop cordifolium had the higher performance than celery. The cordifolium cultivated in reused medium obtained the highest assimilation of NaCl.  These results indicated cordifolium had good stability and adaptability to salt-induced hydroponic environment. And celery could adapt to reused medium with high salinity but could not absorb extra NaCl.

Title of Original Paper:  The Feasibility Research on Reusing High Salinity Wastewater as a Plant Nutrient Medium for Plant Hydroponics in CELSS

Is it feasible to resume high salinity wastewater as a plant nutrient medium for plant hydroponics in CELSS? 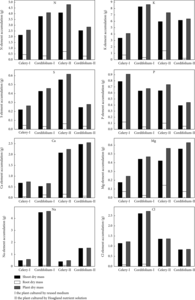