Extending the light absorption from ultraviolet (UV) to near-infrared (NIR) region and improving photocarrier separation efficiency of photocatalysts are of vital importance for solar-driven H2 evolution.

The authors firstly realized a precise defect control on g-C3N4 by introducing the S dopants and C vacancies into the 3D DCN hexagonal prisms. Afterwards, the NYF nanocrystals were successfully loaded onto DCN matrix, forming the broadband NYF@DCN photocatalyst.

The authors found that the use of ethylene glycol and molten sulfur is critical to regulate the defect states in DCN via the creation of S dopants and C vacancies. The defect states can not only extend the solar absorption ability of DCN but also accommodate the excited electrons from valance band and migrated electrons from conductive band via a moderate electron-trapping ability, further improving the charge separation efficiency in the interface between DCN and solution.

In comparison with bulk g-C3N4 (BCN) and DCN, the broadband NYF@DCN exhibited an enhanced solar light harvesting ability, which mainly due to: 1) The formation of defect states in DCN which lowers the excitation energy and extends the visible absorption range to 590 nm, giving a high photocurrent of 12.55 μA cm-2 under 550 nm; 2) The secondary excitation of DCN by the upconverted UV light from NYF crystals as reflected by the upconversion photoluminescence spectra, which rendered NYF@DCN with a promoted photocurrent of  8.01 μA cm-2. The above mentioned enhanced solar absorption is inferred to boost the solar driven H2 evolution.

The CP-MAS 13N NMR spectra and theoretical calculations showed that, in comparison with BCN, a stronger interfacial charge polarization might exist via the Y-N bonding between DCN and NYF, which is favorable for the energy transfer from NYF to DCN via both the photo transfer (PT) pathway and excited state energy transfer (ET) pathway. In summary, the enhanced solar harvesting ability and interfacial charge transfer jointly boost the broadband NYF@DCN with a superior solar driven H2 evolution rate of 2799 μmol h-1 g-1, ranking the top among the g-C3N4 based photocatalysts and upconversion particles-based photocatalysts. 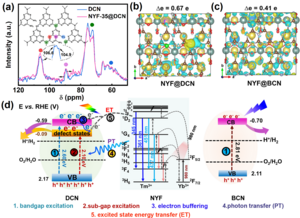