RIVERSIDE, Calif. -- Were it not for the COVID-19 pandemic, an important discovery about the development of nematodes — elongated cylindrical worms — might not have been made.

With most classes and meetings at universities and schools having moved online in 2020-2021, a husband-and-wife research team at the University of California, Riverside, finally found some time to explore a question they had been mulling over for a long time: How do nematodes distantly related to the best-studied one, Caenorhabditis elegans, make their gut, given that the genes responsible for specifying the gut in C. elegans are absent in other nematodes?

“The pandemic freed up some time for us to think about what research we would like to move forward with when the pandemic eased,” said Morris Maduro, a professor of molecular, cell and systems biology and the corresponding author of the study published in Development, a journal. “Fortunately, an experiment we conducted generated a surprising result. It turns out a simpler gene network seems to be involved in specifying the gut in nematodes related to C. elegans. An ancestral species of C. elegans appears to have duplicated and expanded this simpler gene network to make one that is more complicated, and that complicated network is the one we have been studying all this time in C. elegans.”

Due in part to how fast it develops, C. elegans is one of the most widely used model organisms across biological disciplines, especially in studying how genes orchestrate development. About one millimeter in length, C. elegans lives like a scavenger in soil, where it feeds on microbes, such as bacteria, found on rotten food. The nematode is either male or hermaphrodite (with male and female reproductive organs) and is free living. It is neither a human nor plant parasite and does not infect or harm any organism known to scientists.

Maduro, currently the chair of the Department of Molecular, Cell and Systems Biology, has studied C. elegans and other nematodes for more than two decades. He explained that nematodes have a simple anatomy. The digestive system is a single organ, the intestine, and in C. elegans it is made from the descendants of a single cell in the early embryo, called E.

“We and others discovered about 20 years ago that the gene network that causes the E cell to become the gut progenitor involves several genes that are all related to a transcription factor family called GATA factors,” Maduro said.

Using C. elegans, Maduro’s lab has long studied how transcription factors, which are proteins that activate the expression of genes, work in early animal embryos.

“Transcription factors work in what we call gene networks, which are important in biology not only for development of plants and animals, but also for how organisms respond to changes in their environment, and even how cancer cells change their properties within tumors,” Maduro said.

He explained that proteins in living organisms can be thought of as being part of a genetic toolkit.

“Imagine a toolbox with tools such as hammers and screwdrivers and drills,” he said. “You can use the same tools to make a bookshelf or build a house. Although a bookshelf looks different from a house, they can be built with the same toolkit. Likewise, life forms find various ways to use proteins, the genetic tools that are the products of genes. Over time, however, different genes get activated to cause cells to perform certain functions in an animal or plant. The resulting gene networks involve different ways of using the same types of transcription factors.”

Maduro and his wife, Gina Broitman-Maduro, found that the genes they had studied for many years in C. elegans that specified the gut were missing in most other nematodes, leaving them wondering how the intestine gets made in these nematodes.

“At the end of 2021, as the pandemic was easing up, we decided to look at a distant relative of C. elegans, called C. angaria, to see if we could figure out how it makes its gut,” Maduro said. “It was a long-shot experiment as we were not expecting to figure it out. However, in a matter of a few months we found that the many GATA factors in C. elegans were just a single factor in C. angaria. This single factor, ELT-3, actually exists in C. elegans but it does not have the same function.”

In C. elegans the ELT-3 factor is known to be involved in stress responses and its function is replaced by the function of two other genes, END-1 and END-3. Just as in C. angaria when ELT-3 is deleted, the gut in C. elegans cannot form when both of END-1 and END-3 are missing.

“Essentially, we are looking at a biological system that retains a simpler network from an earlier time in evolution — probably 20-50 million years ago — and we can compare it to a more complex version that evolved from it,” Maduro said. “By peering inside cells, we can understand how the machinery of development changed over time. It’s as if we had a time machine to look at the ancestors of C. elegans and understand how evolution resulted in one version of a gene network to change to another without significantly altering what the worm looks like. The changes are internal and happening ‘under the hood,’ and offer an extraordinary opportunity to understand how nature finds different ways to arrive at the same end point.”

To ensure they were on the right track, Maduro and Broitman-Maduro were able to force the C. angaria ELT-3 protein to be expressed at the right time and place in C. elegans. They showed it could specify the gut.

“When people think about genes undergoing change over evolutionary time, they think about a plant or animal doing something different — that is, the genes change so that the animal is bigger, or faster, or can do something that another species cannot, like resist some pathogen, or grow under harsher environmental conditions,” said Broitman-Maduro, first author of the research paper and an associate specialist in the Maduro lab. “Here, the change in gene network doesn’t appear to do anything fundamentally different: The anatomy and development of the distantly related species, C. angaria, are almost indistinguishable from C. elegans.”

A question Maduro and Broitman-Maduro are now investigating is why, compared to other nematodes, C. elegans would need a more complicated gene network to specify the gut.

“One of our ideas is that the new network lets C. elegans develop more quickly, and we are trying to examine this idea in more detail,” Maduro said. “Now that we know what specifies the gut in these distantly related nematodes, we plan to investigate if this mechanism is even more broadly conserved by looking in a more distantly related species, Pristionchus pacificus.”

Maduro and Broitman-Maduro were joined in the research by Simo Sun and Taisei Kikuchi of the University of Tokyo, Japan, who provided an updated genome sequence for C. angaria used in the study.

The research paper is titled “The ELT-3 GATA factor specifies endoderm in Caenorhabditis angaria in an ancestral gene network.”

The authors declare no competing or financial interests.

How do worms develop their gut? 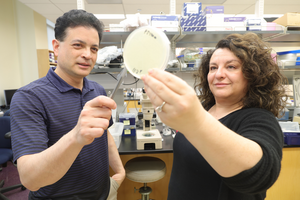