UPTON, NY—The U.S. Department of Energy (DOE) has announced funding for a new Topical Theory Collaboration to be led by DOE’s Brookhaven National Laboratory that will aid in the discovery and exploration of a saturated state of gluons. These aptly named particles carry the nuclear strong force, acting as the ‘glue’ that holds together quarks, the building blocks of all visible matter. By understanding gluons’ ability to split and recombine and potentially reach a state of saturation, scientists hope to gain deeper insight into the strong force and the role gluons play in generating the mass, spin, and other properties of hadrons—composite particles made of quarks, such as the protons and neutrons of atomic nuclei.

The SatURated GluE (SURGE) Topical Theory Collaboration aims to develop calculations and a theoretical framework for discovering this unique saturated form of gluonic matter. Such a saturated state is predicted by the theory of quantum chromodynamics (QCD) to be observable in particles accelerated to high energies in particle colliders such as the Relativistic Heavy Ion Collider (RHIC) at Brookhaven Lab, the Large Hadron Collider (LHC) at Europe’s CERN laboratory, and the future Electron-Ion Collider (EIC) at Brookhaven.

“Our goal is to advance calculations to high precision and develop a comprehensive framework that allows us to compare our theoretical understanding of gluons’ behavior to a wide range of experimental data from RHIC and the LHC and make predictions for what we expect to see at the future EIC,” said Bjoern Schenke, the Brookhaven theorist who will serve as Principal Investigator for the SURGE collaboration.

There have been hints of gluon saturation at RHIC and the LHC, including in a recent analysis reported by RHIC’s STAR collaboration. Recent upgrades expanding the “forward” range of particle detection at STAR and a new RHIC detector, sPHENIX, will also advance scientists’ ability to study the behavior of gluons. The new theory collaboration will help to coordinate these efforts by providing inputs for essential measurements, and by setting consistent benchmarks for accuracy to validate or nullify such searches. Establishing this framework is essential to prepare physicists for “Day 1” discovery physics at the EIC, where signatures of gluon saturation should be fully accessible in the first years of EIC data taking.

This work will require advances on different theoretical frontiers, including:

Obtaining final results that allow a global analysis of this data will rely on a comprehensive and iterative framework that incorporates all these developments. In proposing SURGE, the team emphasized the importance of a collaborative effort from experts in the different areas, as well as close interaction of theorists and experimentalists.

To achieve these goals, the SURGE collaboration will receive $1.95 Million over five years from the Office of Nuclear Physics within DOE’s Office of Science. The funding will help to support theorists from a wide range of backgrounds and help to support the future workforce for the field, including five postdoctoral researchers, seven graduate students, and one undergraduate student at 13 institutions. There will also be a bridge position at the University of Illinois at Urbana Champaign, a key collaborator in Brookhaven Lab’s nuclear physics research. Schenke will serve as SURGE co-spokesperson, along with Anna Stasto, a professor at Penn State University.

“The SURGE Topical Theory Collaboration is a tremendous opportunity to bring together many experts in the field and advance our understanding of many fundamental questions in nuclear physics, including the origin of the mass and spin of hadrons and the unique role of gluons,” Stasto said. 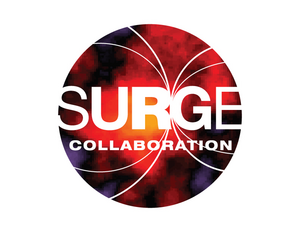