RIVERSIDE, Calif. -- The Salton Sea, the body of water in Southern California’s Coachella Valley and Imperial Valley, is shrinking over time as the planet warms and exposing more lakebed and new sources of dust in the process. High levels of dust already plague the region, a situation likely to worsen as the sea continues to shrink due to climate change.

Not surprisingly, the communities surrounding the Salton Sea have high rates of childhood asthma (20–22.4%) — much higher than the California average of 14.5%.

A University of California, Riverside, mouse study, led by Dr. David Lo, a distinguished professor of biomedical sciences in the School of Medicine, has found that dust collected at sites near the Salton Sea triggered lung neutrophil inflammation in mice. Neutrophils are a type of white blood cells that help fight infection.

“We now have an important direct demonstration that chronic exposures to Salton Sea dust may have a role in the asthma in residents closest to the Salton Sea,” said Lo, who directs the Bridging Regional Ecology, Aerosolized Toxins, & Health Effects, or BREATHE, Center. Housed in the UC Riverside medical school, the center addresses critical issues in air quality and health.

“What residents near the sea are breathing is dissolved material from the sea, with microbial components that can promote inflammation,” Lo said. “As the sea continues to dry up and expose more dust-producing lakebed, it could increase concern for the residents, especially as climate change drives chronic drought in the region.”

Lo explained that dust can cause several pulmonary diseases. In the Salton Sea, contaminants such as pesticides, herbicides, heavy metals, and microbial toxins may be enriched in the dust. To examine the potentially harmful effects of this dust, the study, published in the journal Science of the Total Environment, used an environmental exposure chamber at UC Riverside.

The research team collected dust at four sites, three of which were 0.6, 2, and 4 miles from the Salton Sea lakebed. Dust from a fourth site, located 20 miles from the northwest border of the Salton Sea shoreline, served as the control; the dust here produced no significant lung inflammation.

From the dust they collected, Lo and his colleagues made aqueous extracts and filtered out inert and larger particulate material such as fibers and sand. They then injected suspensions of fine aerosols into the environmental exposure chamber. The mice were exposed to the aerosols for two days (to study acute innate response) or seven days (to study allergic-type response).

“Interestingly, material from dust at the Salton Sea induced strong pulmonary inflammation in the mice, but not the allergic profile more commonly associated with clinical asthma,” Lo said.

“The lung inflammation looks like it is triggered by bacterial components rather than classic allergens like mold, dust mites, or pollen,” he said. “What we are seeing is decidedly different from a classic allergic response. Our next step is to see if this pattern is also true among residents of the region.”

The study has implications for other terminal lakes — those with no outlet — such as the Dead Sea in Israel and Jordan, the Great Salt Lake in Utah, and Mono Lake in Northern California.

“The environmental crisis at the Salton Sea may be occurring at these terminal lakes also or where rivers and lakes are shrinking and causing an ecosystem change,” Lo said. “This may be a warning sign that global warming and drying lakes and chronic drought — think of Lake Powell in Arizona and Utah or Lake Mead in Nevada — are also what we need to pay closer attention to because evaporating waters here are changing the ecology and local environment. These terminal lake regions are unique as they have increasing levels of dust, which can trigger high levels of pulmonary inflammation.”

Lo stressed that understanding dust-triggered inflammation, the mechanisms behind it, and its interaction with allergens and allergic development is crucial and needs more funding to advance.

“Only additional research on this topic will allow us to address in depth the negative health impacts of the dust and develop viable strategies to address them,” he said.

The authors have no competing interests to declare. 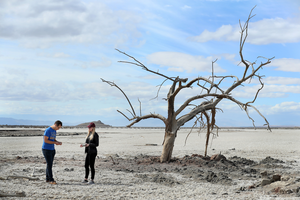