Malaria is one of the world's "big-three" infectious diseases. In 2020 alone, it infected roughly 240,000 million people and caused 630,000 deaths worldwide.

Quinine, an alkaloid derived from the cinchona plant, has been used to treat malaria for centuries. Artificial antimalarial drugs with relatively few side effects, such as chloroquine and mefloquine, have been developed based on the chemical structure of quinine. However, Plasmodium falciparum, the parasite that causes the deadliest form of malaria, has started to become resistant to such drugs.

Now, a research team from Tohoku University has achieved an efficient synthesis of quinine and its derivatives that can serve as a building block for further medication development and innovations in organocatalyst chemistry.

"We accomplished an efficient enantioselective total synthesis of (-)-quinine by using an organocatalyst-mediated reaction," said Professor Yujiro Hayashi. "It is the shortest-pot synthesis."

Synthetic efficiency aids scientists in developing new chemical compounds by cutting the steps it takes to achieve bonds and generate complex molecules. One-pot reactions are one way to do this. They circumvent several purification steps via in situ quenching, thereby minimizing chemical waste and saving time.

The team's discovery is not limited to innovations in medicine. In recent years, quinine and its derivatives have attracted attention for their use as ligands for metal catalysts and as organocatalysts. Whilst many organocatalysts derived from quinine exist and have been applied to a wide range of reactions and syntheses, structure diversity remains limited because of the complexity involved in synthesizing from quinine.

To realize what the team conceptually dub "pot economy," they used an organocatalyst and constructed a six-membered ring from three compounds by controlling two stereocenters in one-pot. This reaction could be conducted over a 10 g scale.

After two one-pot reactions, a heteroaromatic ring, which is capable of being applied to the syntheses of quinine analogs, was introduced. The synthesis requires a total of five separate one-pot operations and five purifications by column chromatography and resulted in a quinine yield of 14%.

Details of the research were published in the journal Nature Communications on December 7, 2022. 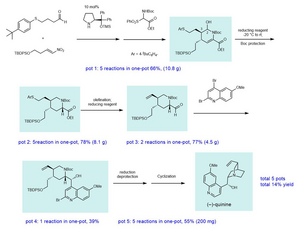