Researchers at the University of Copenhagen's Faculty of Science have modified a yeast cell to sense the active substances in cannabis and get it to turn red when it does. The result paves the way for more actors to discover new medicinal substances and for a new type of drug test that can be done with a smartphone.

The researchers also developed a portable plastic device with a yeast cell biosensor in it. Plant material, saliva, urine, blood and other material is placed into the gizmo. The device then uses the smartphone’s camera to see if the yeast cells light up, delivering its result in just 15 minutes. Photo: Getty

Yeast cells are simple organisms. They do two things in life: eat and propagate. Now, researchers at the University of Copenhagen’s Department of Plant and Environmental Sciences have equipped common baker’s yeast cells with a new function.

The researchers substituted the yeast cell’s sex drive with a sense of taste and smell that allows it to detect cannabinoids, the active substances in cannabis. Going one step further, the researchers made the yeast turn red or glow when it successfully detects cannabinoids. The study has been published in Nature Communications.

"We have made a living sensor out of the yeast cell, which can now sense cannabinoids or molecules that have the same function as cannabinoids even if they look very different than cannabinoids. Among other things, the biosensor can be used to look for new substances with the same properties as cannabinoids. This could democratize medicinal development so that pharmaceutical companies aren’t the only ones equipped to discover new substances," says Professor Sotirios Kampranis of the Department of Plant and Environmental Sciences, who headed the research.

Humans use hundreds of different GPCRs (G-protein-coupled receptors) to taste and smell. In our noses alone, 400 different GPCRs make it possible for us to detect and distinguish between the smell of roses and freshly baked bread, each of which activates different GPCRs that then signal the brain.

Along with his research colleagues, Professor Kampranis swapped the GPCR that yeast cells use to sense the opposite sex in an environment, with the GPCR we humans use to recognize cannabinoids. At the same time, the researchers complemented the yeast cell's genetic material with a set of new genes that make it turn red or even glow when it senses cannabinoids nearby.

"The yeast cell now emits a signal when there are cannabinoids in the yeast cell's environment. This allows us to screen thousands of plants for substances with therapeutic potential. And we can also investigate whether people are on drugs or whether someone is trying to smuggle illegal cannabinoids or “designer drugs” through an airport checkpoint," explains Professor Sotirios Kampranis.

There is no doubt that the yeast cell can find new substances. In initial tests, the researchers used the yeast cell to study 1600 random substances from a vast chemical compound library available at the University of Copenhagen. It didn’t take long to get a bite.

"In a single day, the yeast cell found four undiscovered substances that had never been associated with anti-inflammatory properties or pain relief, but could potentially be used for these purposes," says Sotirios Kampranis.

When drug companies look for new drugs today, it is with the help of state-of-the-art robotics and laboratory equipment that universities and other non-commercial entities will never be able to afford. That the researchers have developed an alternative, may allow for more people to hunt for helpful substances in nature.

"It's a crowdsourcing approach whereby smaller laboratories can find more new potential substances for pharmaceutical use. I don't see it as competition with pharmaceutical companies – but as something that can create a synergy between independent players in the scientific world and the pharmaceutical industry," says Professor Kampranis.

The researchers also developed a portable plastic device with a yeast cell biosensor in it. Plant material, saliva, urine, blood, material from a suitcase, or whatever one would like for the yeast cell to test, is placed into the gizmo.

The device then uses the smartphone’s camera to see if the yeast cells light up, delivering its result in just 15 minutes. The application could be able to help police officers and others track down drugs at airports or administer drug tests.

"We can test for both natural cannabinoids and designer drugs – chemical substances that have very different structures – with the same effects as cannabinoids. In principle, we could also adapt the yeast cell to be able to detect opioids like morphine, fentanyl and oxycodone," says Sotirios Kampranis.

The device can be 3D printed or assembled using materials easily obtained online. The researchers are now working to make the test tool available free of charge, for as many people as possible, but at the same time be able to maintain control for maintenance and further development. 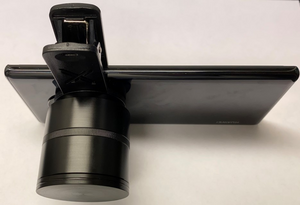 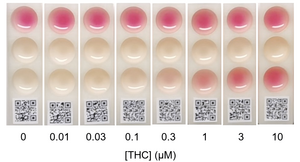 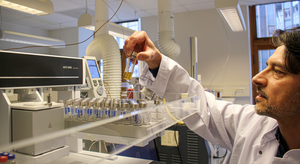