Together with the Orion spacecraft of the Artemis I mission, as part of the MARE experiment, two human phantoms equipped with numerous cosmic rays detectors are to land on Earth. The information gathered by the detectors will for the first time verify the knowledge, crucial for the presence of humans in deep space, of the effects of cosmic rays on the health of the astronauts who are to live and work in an environment devoid of the protective effects of our planet's magnetosphere.

Of the numerous dangers lurking for astronauts undertaking long-distance space travel, among the most serious and at the same time the most difficult to eliminate, is exposure to harmful doses of cosmic radiation. Data collected during the MARE experiment (MATROSHKA AstroRad Radiation Experiment) will help ensure the safety of future deep space pioneers. As part of it, two human phantoms equipped with numerous cosmic radiation detectors were placed aboard the Orion spacecraft of the Artemis I mission. At the invitation of the German Space Centre (DLR) in Cologne, the coordinator of the MARE project, the Institute of Nuclear Physics of the Polish Academy of Sciences (IFJ PAN) in Cracow is participating in the experiment.

“MARE is a continuation of a series of experiments carried out on the International Space Station between 2004 and 2009 as part of the MATROSHKA project, in which we also participated. Back then, radiation dose data were necessarily collected in low Earth orbit. Now, thanks to the NASA Artemis I mission, human phantoms stuffed full of radiation detectors have for the first time gone beyond the protective range of not only the Earth's atmosphere, but also the magnetosphere,” says Prof. Pawel Bilski (IFJ PAN).

Cosmic radiation, to which astronauts journeying at great distances from Earth are to be exposed, is extremely complex in nature. Its galactic component comes from deep space and contains all sorts of naturally occurring particles and atomic nuclei, with a very wide range of energies, often far beyond the values encountered under Earthly conditions. Another source of high-energy particles, this time within our planetary system, are eruptions on the Sun, infrequent, but involving serious risk to the health and even the lives of astronauts. In addition, solar wind particles are continuously accumulating around the Earth within two doughnut-shaped areas of the magnetosphere called the Van Allen belts. Although these belts are located at altitudes of only a few thousand kilometres, they have to be traversed twice during any long-distance crewed expedition.

NASA's main goal during the Artemis I mission was to test the Orion crewed spacecraft in an uncrewed circumlunar flight. The lack of passengers was decided to be exploited to verify current knowledge about the effects of cosmic radiation on the human body. As a result, two female phantoms named HELGA and ZOHAR, each weighing 39 kg, were placed inside Orion. The ZOHAR phantom was dressed in AstroRad protective vest, manufactured by the Israeli company StemRad.

“Our Institute's contribution to the MARE experiment is primarily 276 passive thermoluminescent detectors in the ZOHAR phantom and further 288 detectors in 12 measurement packages on the surface of both phantoms. These detectors are in the form of thin white pellets a few millimetres in diameter,” says Prof. Bilski.

The main material used for the production of the detectors from IFJ PAN is lithium fluoride enriched with carefully selected admixtures. These cause additional metastable energy levels to appear in the material. When cosmic ray particles pass through material composed in such a manner, ionization of atoms occurs. Some of the electrons that are knocked out then end up in the metastable levels where they can stay for months, as if in a trap. What is of key significance is that the more cosmic ray particles pass through the detector, the more electrons are trapped.

The radiation dose recorded by the lithium fluoride detector can be read thanks to the phenomenon of thermoluminescence. In the laboratory, individual detectors are gradually heated to temperatures of several hundred degrees Celsius. The energy supplied causes electrons to start jumping out of successive metastable energy traps. Some of them quickly recombine, accompanied by the emission of photons. The result is a glow, known by physicists as thermoluminescence.

“Our lithium fluoride detectors work in such a way that the amount of light emitted when they are heated is proportional to the dose deposited by cosmic ray particles that have interacted with the material. The reading of the data is therefore reliable and relatively simple, albeit non-trivial. This is because different traps in the material have different properties and empty at different temperatures,” explains Prof. Bilski.

Measurements within the MARE experiment are primarily intended to verify existing knowledge about the effects of cosmic radiation on the human body. The priority is to reduce the risk to astronauts to a minimum, but the research also has a purely practical dimension. This is because the point is to ensure that overly restrictive safety standards do not limit human activity in deep space.

If the return of the Orion spacecraft of the Artemis I mission is successful, the detectors from the ZOHAR and HELGA phantoms will soon return to IFJ PAN for data reading. Preliminary results on the cosmic radiation doses they recorded will be presented by the international MARE experiment team in the first months of next year.

The Henryk Niewodniczański Institute of Nuclear Physics (IFJ PAN) is currently one of the largest research institutes of the Polish Academy of Sciences. A wide range of research carried out at IFJ PAN covers basic and applied studies, from particle physics and astrophysics, through hadron physics, high-, medium-, and low-energy nuclear physics, condensed matter physics (including materials engineering), to various applications of nuclear physics in interdisciplinary research, covering medical physics, dosimetry, radiation and environmental biology, environmental protection, and other related disciplines. The average yearly publication output of IFJ PAN includes over 600 scientific papers in high-impact international journals. Each year the Institute hosts about 20 international and national scientific conferences. One of the most important facilities of the Institute is the Cyclotron Centre Bronowice (CCB), which is an infrastructure unique in Central Europe, serving as a clinical and research centre in the field of medical and nuclear physics. In addition, IFJ PAN runs four accredited research and measurement laboratories. IFJ PAN is a member of the Marian Smoluchowski Kraków Research Consortium: "Matter-Energy-Future", which in the years 2012-2017 enjoyed the status of the Leading National Research Centre (KNOW) in physics. In 2017, the European Commission granted the Institute the HR Excellence in Research award. As a result of the categorization of the Ministry of Education and Science, the Institute has been classified into the A+ category (the highest scientific category in Poland) in the field of physical sciences.

Installation of passive thermoluminescent detectors in the phantom. (Source: DLR)

The Artemis I mission was used to collect data on the interaction of cosmic rays with the human body outside the protective shield of the Earth's magnetosphere. (Source: NASA) 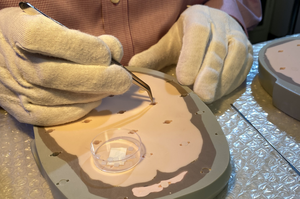 Installation of passive thermoluminescent detectors in the phantom 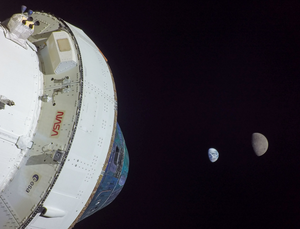 Collecting data during the Artemis I mission