The term aromaticity was initially introduced to describe the properties of molecules with special aromatic odor, such as benzene, and now is considered as one of the most important concepts in chemistry. It is widely used to account for the unusual stability of aromatic compounds arising from delocalization of electrons. Aromaticity can be assessed by various aromatic criteria, such as, Hückel 4n+2 rule, spherical 2(n+1)2 rule, nuclear independent chemical shifts (NICS), and ring currents. However, aromaticity of the complex polycyclic systems cannot be well explained by the existing rules. Moreover, different rules come to contradictory conclusions when evaluating the aromaticity of some species. For instance, C60 should be of the highest aromaticity among fullerenes from the perspective of delocalization energy and geometric factor. Nevertheless, it does not satisfy the 2(n+1)2 rule of spherical aromaticity, and is even suggested to be globally non-aromatic based on ring currents and NICS values, which is obviously unreasonable. Besides, stability of polycyclic conjugated hydrocarbons (PCHs), fullerenes, and graphenes all result from conjugation of pz electrons of sp2 carbon atoms, thus their aromatic rules should be the same. However, due to the complexity and diversity, there are still no unified languages for these systems. Additionally, the existing rules pay much attention to the relationship between aromaticity and degree of delocalization, but neglect the local character.

To solve these problems, and meanwhile to give a clear chemical insight into the aromaticity. Recently, a research team lead by Prof. Longjiu Cheng at Anhui University along with Prof. Jinlong Yang at University of Science & Technology of China jointly proposed a two-dimensional (2D) superatomic-molecule theory via introducing the superatom theory and the super valence bond theory to the research of aromaticity. It builds a generalized electron-rule for PCHs, fullerenes and 2D periodic materials.

Researchers stated that π electrons in monocyclic CnHn molecules could be well described by a 2D jellium model. The appropriate aufbau rule of the 2D jellium model is |S2|P4|D4|F4|…, associated with magic numbers 2, 6, 10, 14…, satisfying the Hückel 4n+2 rule. Thus, benzene can be taken as a six-electron 2D superatom (S2P4) in both geometric and electronic shell-closure. The team defined a 2D periodic table of elements, among which benzenoid units with 6, 5, 4, and 3 π electrons were symbolized as ◊Ne, ◊F, ◊O, and ◊N superatoms, respectively. In addition, 2D superatoms can form 2D superatomic-molecules via sharing π electrons, jusk like the way traditional atoms do. Thus, PCHs are taken as 2D superatomic-molecules. Specifically, naphthalene, anthracene, phenanthrene, triphenylene and coronene correspond to ◊F2，linear and bent ◊O◊F2, ◊N◊F3, and ◊O6, respectively. Each 2D superatom satisfies the super sextet rule of ◊Ne via superatomic bonds and superatomic lone pairs, thus realizing electronic shell-closure, and eventually leading to local aromaticity. The theory provides direct chemical insights into the local aromaticity of PCHs by virtue of superatomic Lewis structures, and molecular orbitals and chemical bonding analyses verify the rationality of the theory.

Moreover, the magic stability of C60 can be deciphered by the 2D superatomic-molecule model. It is viewed as a ◊N20 cage with the highest local aromaticity, where hexagons are ◊N superatoms while pentagons are non-aromatic holes. Its special stability results from both electronic and geometric shell-closure. The study provides direct chemical insight into the electronic structure of C60 for the first time.

Additionally, graphene is seen as a superatomic crystal consisting of SP2-hybridized ◊N superatoms, and there are three resonant superatomic Lewis structures with different location of the non-aromatic holes, resulting in totally delocalization of π electrons and metallic property. Based on the local character of 2D superatomic-molecules, two 2D superatomic crystals (◊N2◊O3 and ◊N6◊O9) with large band gap of ~ 1.8 eV were predicted via ‘bottom to up’ approach and taking PCHs as building blocks, thus successfully modulating the band gap of graphene material.

This research originally proposed a 2D superatomic-molecule theory. It connected the aromaticity of PCHs, fullerenes and 2D periodic materials, and was developed into a generally unified theory for conjugated π systems. It provides theoretical foundation to the areas of evolution of PCHs, band gap engineering of graphene-like materials, and design of new 2D functional materials.

This work are published on October 2022 in National Science Review (NSR), and is supported by the National Key Research & Development Program of China and the National Natural Science Foundation of China.

Illustrations for the constructions of 2D superatomic molecules 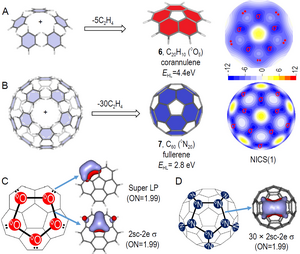 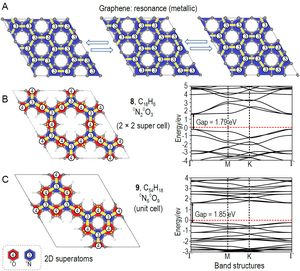