A team of researchers led by Narimane Chatar, a doctoral student at the EDDyLab of the University of Liège (Belgium), has tested the biting efficiency of Smilodon, an extinct species of carnivore close to the extant felines.  Using high-precision 3D scans and simulation methods, the team has just revealed how these animals managed to bite despite the impressive length of their teeth.

Ancient carnivorous mammals developed a wide range of skull and tooth shapes throughout their evolution. However, few of these evolutions have yet matched those of the iconic sabre-toothed felid Smilodon. Other groups of mammals, such as the now extinct nimravids, have also evolved a similar morphology, with species having sabre teeth but also much shorter canines, similar to those of the lions, tigers, caracals, domestic cats, etc. that we know today. This phenomenon of similar morphologies appearing in different groups of organisms is known as convergent evolution; felids and nimravids being an amazing example of convergence. As there are no modern equivalents of animals with such sabre-shaped teeth, the hunting method of Smilodon and similar species has remained obscure and hotly debated. It was first suggested that all sabre-toothed species hunted in the same way, regardless of the length of their canines, a hypothesis that is now controversial. So the question remained ... how did this variety of 'sabre-toothed cat' hunt?

The enormous canines of the extinct sabre-toothed cat Smilodon imply that this animal had to open its jaw extremely wide, 110° according to some authors, in order to use them effectively," explains Prof. Valentin Fischer, director of the EDDyLab at ULiège. However, the mechanical feasibility and efficiency of Smilodon and its relatives to bite at such a large angle is unknown, leaving a gap in our understanding of this very fundamental question about sabre-toothed predators." Using high-precision 3D scanners and analytical methods derived from engineering, an international team of Belgian and North American scientists has just revealed how these animals probably used their impressive weapons.

Narimane Chatar, a PhD student at the EDDyLab of the University of Liege and lead author of the study, collected a large amount of three-dimensional data. She first scanned and modelled the skulls, mandibles and muscles of numerous extinct and extant species of felids and nimravids. "Each species was analysed in several scenarios: a bite was simulated on each tooth at three different biting angles: 30°, as commonly seen in extant felids, but also larger angles (60° and 90°). In total, we carried out 1,074 bite simulations to cover all the possibilities," explains Narimane Chatar. To do this, the young researcher used the finite element method. This is an exciting application of the finite element approach, which allows palaeontologists to modify and computationally simulate different bite angles and to subject skull models to virtual stresses without damaging the precious fossil specimens," says Prof. Jack Tseng, Professor and Curator of Palaeontology at the University of California, Berkeley, and co-author of the study. Our comprehensive analyses provide the most detailed insight to date into the diversity and nuances of sabre tooth bite mechanics."

One of the results obtained by the team is the understanding of the distribution of stress (pressure) on the mandible during biting. This stress shows a continuum across the animals analysed, with the highest values measured in species with the shortest upper canines and the lowest stress values measured in the most extreme sabre-toothed species. The researchers also noted that stress decreased with increasing bite angle, but only in sabre-toothed species. However, the way in which these animals transmitted force to the bite point and the deformation of the mandible resulting from the bite were remarkably similar across the dataset, indicating comparable effectiveness regardless of canine length.

"The results show both the possibilities and the limits of evolution; animals facing similar problems in their respective ecosystems often end up looking alike through convergent evolution. However, Narimane Chatar's results also show that there can be several ways to be an effective killer, whether you are sabre-toothed or not," concludes Valentin Fischer. This phenomenon, called ’many-to-one’ systems, means that distinct morphologies can result in a similar function, such as the fact that bears and cats are both efficient fishers. This multiplicity of morphologies indicates that there is no single optimal form of sabre-toothed predator. 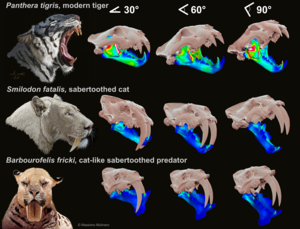