Scientists are trying to uncover and analyze evidence from the past in their search for a better assessment of future climate trends. In a joint international research project, researchers have been studying the effects of the sudden decrease in global temperatures that occurred about 8,200 years ago, the so-called 8.2-kiloyear event, with the help of mineral deposits present in White Moon Cave in Northern California. New indications show that oscillations between extreme wetness and aridity in California were closely linked with the occurrence of wildfires. The participating researchers from Johannes Gutenberg University Mainz (JGU) in Germany, Vanderbilt University in Nashville, USA, and Northumbria University in Newcastle upon Tyne in the UK have concluded that such events are likely to become more common in the face of human-induced climate change. The corresponding article has been published recently in Nature Communications.

Stalagmites as a valuable archive of climate data

Climate change and its effects on our seasons, water resources, vegetation, and soil have already become clearly apparent. The rate and intensity of wildfires in semi-arid regions, such as those in the west of North America, already exceed those that might be expected in view of the historical records.

To be able to predict future scenarios, it is helpful to better understand the climate of the past. There are readily datable climate archives that reach back many thousands of years that preserve traces of chemical compounds. These compounds provide insight into continental and regional climatic changes and the prevailing environmental conditions. One of the most easily datable and detailed climate archives of this kind is provided by various forms of mineral deposits, known as speleothems, which accumulate in caves. Stalagmites are of particular interest in this connection because of their uniform growth pattern.

By analyzing the content of two novel marker substances, i.e., levoglucosan and lignin oxidation products (LOPs), in a stalagmite, the team of researchers from Mainz, Nashville, and Newcastle have been able to reconstruct fire activity and vegetation composition in the California Coast Range during the 8.2-kiloyear event. This cold phase lasted several hundred years. Evidence of the event was first detected in the analysis of pollen in early Holocene deposits in the Swiss Alps and later also in ice cores obtained in Greenland. The results of further studies indicate that precipitation rates in western North America at this time were much more variable than usual. Erratic climate-related swings of this type are characteristic of a phenomenon called climate whiplash. Many scientists share the opinion that we will see more climate whiplash events as a consequence of global warming.

"The results we have now published suggest that both vegetation composition and wildfire activity were directly linked to this climate whiplash event," explained Julia Homann, a doctoral candidate in the research group of Professor Thorsten Hoffmann at Mainz University. Elevated concentrations of levoglucosan indicate increased fire activity, while altered LOP compositions represent a shift towards more tree-like vegetation during the 8.2-kiloyear event. The detected changes were direct consequences of a profound climate whiplash, in other words, stronger hydroclimate fluctuations.

"We are likely to witness an increasing frequency of both climate whiplash and wildfire activity because of human-made global warming," said Homann. The climate in the region in question is thus progressively coming to resemble that of 8,000 years ago, although under very different circumstances. "The climate whiplash back then was caused by natural environmental variations. Today it is us humans who are wielding the whip," concluded Homann of JGU's Department of Chemistry. 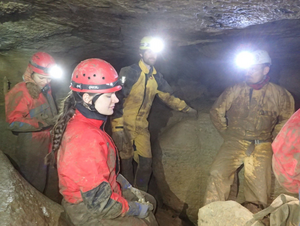 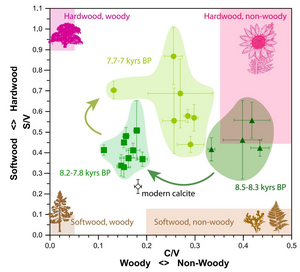