More than 90% of marine species are undescribed and many may go extinct due to human activity before they’re discovered — the loss of unique, potentially valuable genetic resources resulting in unpredictable effects on global ecosystems essential to human food supplies and climate regulation.

While roughly 28,000 deep-sea animal species have been described and named, an estimated 2.2 million other marine species, including deep-sea, are unknown to science, of which many are thought to be threatened with extinction.

In 2019, the Scaly-foot Snail (Chrysomallon squamiferum) became the first deep-sea species listed as globally endangered due to the threat of deep-seabed mining.

“We know very little about them, and there is not yet an international framework to guide the implementation of conservation measures,” says lead author of the brief, Dr. Stefanie Kaiser of the Senckenberg Research Institute and Natural History Museum, Frankfurt.

Knowledge of deep-sea species biodiversity is an obvious first step to effective protection of both the species and the ecosystem processes associated with them.

The scientists warn that deep sea species are increasingly exposed to pollution and habitat destruction.

In particular, global warming, ocean acidification and resource depletion could lead to dramatic changes in deep-sea biodiversity with unpredictable consequences for humans as well.

“Deep-sea areas seem very distant and insignificant at first glance; it's not immediately clear what this vast ecosystem and its inhabitants are doing for us," explains Dr. Kaiser.

"The deep sea — defined as 200 to 11,000 meters depth and beyond — is the world's largest habitat, covering more than half of earth's surface. It is essential to global climate regulation by storing carbon dioxide and heat and by maintaining biodiversity.”

They were joined by researchers from 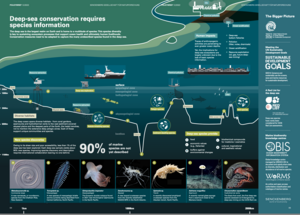