Along with producing anxiety in the mice who consumed aspartame, the effects extended up to two generations from the males exposed to the sweetener. The study is published in the Proceedings of the National Academy of Sciences.

“What this study is showing is we need to look back at the environmental factors, because what we see today is not only what’s happening today, but what happened two generations ago and maybe even longer,” said co-author Pradeep Bhide, the Jim and Betty Ann Rodgers Eminent Scholar Chair of Developmental Neuroscience in the Department of Biomedical Sciences.

The study came about, in part, because of previous research from the Bhide Lab on the transgenerational effects of nicotine on mice. The research showed temporary, or epigenetic, changes in mice sperm cells. Unlike genetic changes (mutations), epigenetic changes are reversible and don’t change the DNA sequence; however, they can change how the body reads a DNA sequence.

“We were working on the effects of nicotine on the same type of model,” Bhide said. “The father smokes. What happened to the children?”

The U.S. Food and Drug Administration (FDA) approved aspartame as a sweetener in 1981. Today, nearly 5,000 metric tons are produced each year. When consumed, aspartame becomes aspartic acid, phenylalanine and methanol, all of which can have potent effects on the central nervous system.

Led by doctoral candidate Sara Jones, the study involved providing mice with drinking water containing aspartame at approximately 15% of the FDA-approved maximum daily human intake. The dosage, equivalent to six to eight 8-ounce cans of diet soda a day for humans, continued for 12 weeks in a study spanning four years.

Pronounced anxiety-like behavior was observed in the mice through a variety of maze tests across multiple generations descending from the aspartame-exposed males.

“It was such a robust anxiety-like trait that I don’t think any of us were anticipating we would see,” Jones said. “It was completely unexpected. Usually you see subtle changes.”

When given diazepam, a drug used to treat anxiety disorder in humans, mice in all generations ceased to show anxiety-like behavior.

Researchers are planning an additional publication from this study focused on how aspartame affected memory. Future research will identify the molecular mechanisms that influence the transmission of aspartame’s effect across generations.

This research was supported by the Jim and Betty Ann Rodgers Chair Fund at Florida State University and by the Bryan Robinson Foundation. 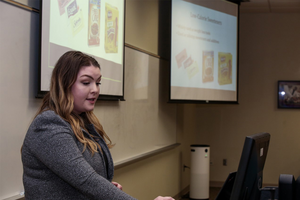