WEHI researchers in Melbourne have answered a 100-year-old question in diabetes research: can a molecule different to insulin have the same effect? The findings provide important insights for the future development of an oral insulin pill.

The research team has visualised how a non-insulin molecule can mimic the role of insulin, a key hormone needed to control blood sugar levels.

The WEHI-led study opens new avenues for the development of drugs that could replace daily insulin injections for people with type 1 diabetes.

The new research confirms that alternative molecules can be used to turn on blood glucose uptake, bypassing the need for insulin altogether.

The study, published in Nature Communications, was led by WEHI’s Dr Nicholas Kirk and Professor Mike Lawrence, in collaboration with researchers from Lilly, an American-based pharmaceutical company.

Why is there no insulin pill?

Dr Kirk said scientists have struggled to make insulin as a pill, because insulin is unstable and readily degraded by the body upon digestion.

“Since the discovery of insulin 100 years ago, the development of an insulin pill has been a dream for diabetes researchers but, after decades of trying, there has been little success,” he said.

The research has now accelerated dramatically with the development of cryo-electron microscopy (cryo EM), a new technology that can visualise complicated molecules in atomic detail, allowing researchers to generate 3D images ("blueprints") of the insulin receptor rapidly.

“With cryo-EM, we can now directly compare how different molecules, including insulin, change the shape of the insulin receptor,” said Dr Kirk.

“Insulin's interaction turns out to be far more complex than anyone predicted, with both insulin and its receptor changing shape dramatically as they partner up.”

The new research shows how an insulin-mimicking molecule acts on the insulin receptor and turns it on, the first step in a pathway that directs cells to soak up glucose when the body’s sugar levels are too high.

The team performed intricate cryo-EM reconstructions to obtain blueprints of several molecules called “peptides” that are known to interact with the insulin receptor and hold it in the “active” position.

The cryo-EM experiments identified that one peptide that can bind to and activate the receptor in a manner similar to insulin.

“Insulin has evolved to hold the receptor carefully, like a hand bringing a pair of tongs together,” Dr Kirk said.

“The peptides we used work in pairs to activate the insulin receptor – like two hands grabbing the pair of tongs around the outside.”

While therapeutic outcomes are distant, the team's discovery could lead to a drug to replace insulin, reducing the need for injections by diabetics.

“Scientists have had success replacing these kinds of mimetic molecules with drugs that can be taken as pills,” Dr Kirk said.

“It’s still a long road that will require further research, but it’s exciting to know that our discovery opens the door for oral treatments for type 1 diabetes.”

The study, “Activation of the human insulin receptor by non-insulin-related peptides”, is published in Nature Communications. The research was supported financially by Lilly.

Activation of the human insulin receptor by non-insulin-related peptides

Could insulin come in a pill? How a molecule that mimics insulin may advance diabetes research 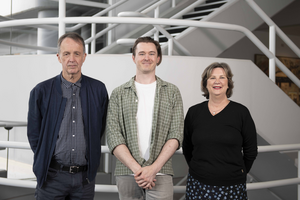