In its race to advance assisted reproduction and stem cell associated technologies to save the northern white rhinoceros from extinction, the BioRescue consortium announces a major breakthrough: the creation of primordial germ cell-like cells (PGCLSs) from induced pluripotent stem cells of the northern white rhino Nabire. This milestone was led by specialists from Osaka University, Japan, and has never been achieved in large mammals before. Now there is one last step to master for the production of artificial rhino gametes (eggs and sperm) from preserved tissue. If successful, this would boost the availability and genetic diversity of embryos and become a cornerstone for saving the northern white rhinoceros. The scientists describe the culture systems and processes for the induction of the PGCLCs from stem cells in a newly published paper in the journal Science Advances.

Thirty-three-year-old Najin and her daughter Fatu are the last surviving northern white rhinos on the planet. Without a possibility for natural reproduction with only two females left of their kind, the only hope for the northern white rhinoceros lies in advanced assisted reproduction technologies. The scientists of the BioRescue consortium have already produced northern white rhino embryos by in vitro fertilisation of oocytes with sperm. Embryos are destined to be carried to term by southern white rhino surrogate mothers. Crucial to embryo production is the availability of oocytes (egg cells) and sperm. Female Fatu is the only donor of natural oocytes left and frozen sperm is available to the program from only four males – and some of these males are closely related to Fatu. With stem cell associated techniques (SCAT) the BioRescue scientists aim to overcome this bottleneck: By using stored and preserved tissue of rhino skin it should be possible in principle to create induced pluripotent stem cells (iPCSs), primordial germ cells and finally artificial gametes. This could increase the number of individuals in the founder group of a future population to 12 and permit the production of oocytes in much larger quantities. According to their most recent paper published in the journal Science Advances, the team has now successfully cultivated primordial germ cells (PGCs) – the precursors of eggs and sperm – from embryonic stem cells (ESCs) and induced pluripotent stem cells (iPSCs).

In sexually reproducing organisms such as humans, rhinos or mice, primordial germ In sexually reproducing organisms such as humans, rhinos or mice, primordial germ cells (PGCs) are embryonic precursors of sperm and eggs that pass on genetic and epigenetic information from one generation to the next. In order for them to be developed from stem cells, they need a very specific environment in which signals from hormones or proteins trigger the required morphological and functional transformation. This also includes a migration of the cells in the body (PGC migration). For the first time in large mammals, BioRescue scientists Masafumi Hayashi and Katsuhiko Hayashi and their team from Osaka University succeeded in creating such an environment in a culture system. They established culture systems for the southern white rhino, for which embryonic stem cells are available, and the northern white rhino, for which they used induced pluripotent stem cells derived from tissue samples. In order to succeed they needed to identify the signals which had to be introduced to the system at specific time points and the order in which they should trigger the development into PGCLCs.

The scientists relied on knowledge from the mouse model: In 2016, Katsuhiko Hayashi and his team managed to create primordial germ cell-like cells and finally germ cells from mice that were fertilised in the lab and resulted in healthy offspring being born. In the case of the white rhinoceroses, Hayashi is working in close cooperation within BioRescue with Sebastian Diecke’s Pluripotent Stem Cells Platform at the Max Delbrück Center and with reproduction experts Thomas Hildebrandt from Leibniz-IZW, both of them last authors of the paper, and Cesare Galli from Avantea.

Through repeated refinement, the BioRescue team produced PGCLCs from northern white rhino Nabire under a defined condition. Because PGCs are the founder population for gametes, this accomplishment paves a way to produce functional gametes from induced pluripotent stem cells from northern white rhinos which will contribute to the effort to rewind their extinction. As soon as the creation of artificial gametes is successful, this plan merges with the procedures that BioRescue carries out with natural gametes: Just like with oocytes obtained from Fatu and sperm thawed from frozen samples, the artificially created eggs and sperm would be in vitro fertilised in the lab. The embryos created in this way would be stored safely in liquid nitrogen until a transfer to a surrogate mother is possible.

The southern white rhino embryonic stem cells which were used in Japan come from the Avantea laboratory in Cremona, Italy, where they were grown by Cesare Galli’s team. The newly derived northern white rhino PGCs, meanwhile, originated from the skin cells of Fatu’s aunt Nabire, who died in 2015 at Safari Park Dvůr Králové in the Czech Republic. Sebastian Diecke’s team at the Max Delbrück Center was responsible for converting them into induced pluripotent stem cells.

All BioRescue procedures are accompanied by ethical risk assessments, conducted under the guidance of the Ethics Laboratory for Veterinary Medicine, Conservation and Animal Welfare at the University of Padua, Italy. 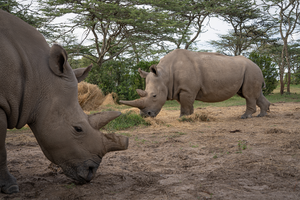 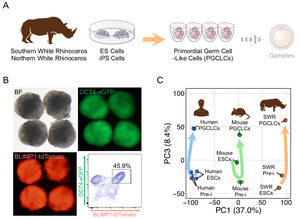 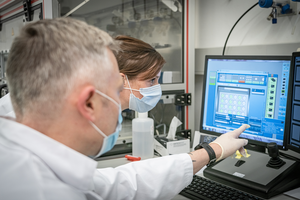 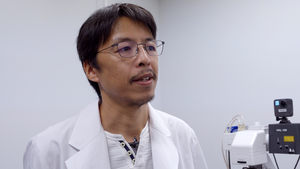