Biofilms, complex communities of bacteria, abound around us: on the surface of cheese where they give off flavors and aromas, in streams where they form the slimy substance on rocks, on our teeth where they form plaque.

Living in a biofilm provides numerous advantages to bacteria: things like resource sharing, shelter from predators, and increased resistance to toxic compounds such as antibiotics.

But having the option to leave the biofilm when environmental conditions deteriorate can be a plus for bacteria, too, allowing them to relocate to a more hospitable environment.

‘’For the bacterium Caulobacter crescentus, the biofilm becomes a kind of prison in perpetuity: once cells are attached to a surface through a strong adhesive at one end of the cell, they cannot leave the biofilm,” said Yves Brun, a professor in the Department of Microbiology, Infectious Diseases and Immunology at Université de Montréal.

‘’However, when these attached cells divide, their unattached ‘daughter’ cells have a choice of joining the biofilm or swimming away.’’

How do cells decide to stay or leave the biofilm? ‘’We showed in a study published in 2010  that when Caulobacter cells die in the biofilm, they release their DNA, which inhibits daughter cells from joining the biofilm, hence promoting relocation from environments where death rate increases,’’  Brun said.

He and his research team therefore wanted to determine if cell death occurred randomly as the environmental quality declined or if it was a regulated process responding to a specific signal.

‘’We showed that Caulobacter uses a programmed cell death mechanism that causes some cells to sacrifice themselves when the conditions inside the biofilm deteriorate,” said team member Cécile Berne, the lead author of the study.

‘’Known as a toxin-antitoxin system, this mechanism uses a toxin that targets a vital function and its associated antidote, the antitoxin,” she said. “The toxin is more stable than the antitoxin and when programmed cell death is initiated, the amount of antitoxin is reduced, resulting in cell death.’’

‘’Using a combination of genetics and microscopy, we showed that the toxin-antitoxin system is activated when oxygen becomes sparse as the biofilm becomes larger and cells compete for the available oxygen,’’ Berne added.

The resulting death of a subset of cells releases DNA, which promotes the dispersal of their live siblings to potentially more hospitable environments, thereby preventing overcrowding that would further reduce environmental quality in the biofilm.

Biofilms have both positive and negative impacts on our everyday life. Bacteria living in biofilms are commonly used in food production, wastewater treatment, and pollution remediation.

‘’The downside is that the biofilm lifestyle is also a strategy used by pathogenic bacteria to become more resistant to antibiotics,” said Brun.

“Understanding the mechanisms driving the balance between cells joining the biofilm and cells  swimming away will help us develop solutions to the challenge of antibiotic resistance, to promote the formation of biofilms when we want them, and eradicate them when we do not.’’

“eDNA-stimulated cell dispersion from Caulobacter crescentus biofilms upon oxygen limitation is dependent on a toxin-antitoxin system” by Cécile Berne, Sébastien Zappa and Yves Brun was published in eLife on December 7, 2022.

Life and death of an "altruistic" bacterium 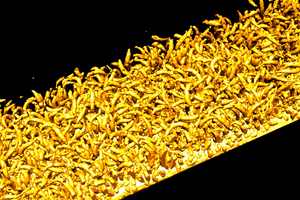 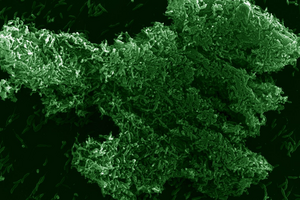