PULLMAN, Wash. – The “super grain” quinoa has the potential to make a super cookie, according to research by Washington State University.

In a study published in the Journal of Food Science, WSU researchers show that two types of quinoa, bred specifically to grow in Washington state, had great functionality as a potential high-fiber, high-protein additive flour for commercial cookies. This means when baked, the cookies had good “spreadability” and texture.

Taste tests are still underway, but preliminary results show that people preferred sugar cookies with 10% of the quinoa flour over a traditional all-wheat flour cookie.

“It’s the Holy Grail for food scientists: we want to develop something that people love to eat and want to go buy and buy again – and now we’re adding some fiber in without them even knowing it,” said Girish Ganjyal, a WSU food scientist and the study’s corresponding author.

Originating in South America, quinoa has a host of nutritional benefits: it is high in fiber, protein, vitamins and minerals. It is also gluten-free. While the grain is popular with health enthusiasts, it has yet to take off with many mainstream consumers. WSU researchers are working to change that.

While no official counts are available, WSU plant breeder Kevin Murphy estimates that quinoa is grown on more than 5,000 acres in the Pacific Northwest currently, and more farmers are interested.

Murphy, a co-author on this study, has been breeding quinoa lines specifically to grow well in the Pacific Northwest climate while maintaining, and even enhancing, the crop’s nutritional benefits. He has been collaborating with Ganjyal since 2014 on improving ways to bring these crops to consumers’ tables.

The current study also identified one type of quinoa that works best for “pre-cooked grain salad” – a more familiar use for quinoa – as well as identifying the quinoa varieties that worked well in baking cookies.

Food science studies like this, combined with field trials that demonstrate the crops’ agronomic traits, will help WSU researchers decide which quinoa breeding lines to release for growers’ use in 2023.

In turn, the information will help farmers decide which type of quinoa they might plant, already knowing how they could sell the crop they harvest, Ganjyal said.

In this study, researchers looked at ten different quinoa breeding lines and tested them as a flour in cookies at 25% up to 100% quinoa. Many of the breeding lines held up well at the lower levels but the cookies tended to crumble as they approached 100% quinoa flour.

The preliminary results from the taste tests also show that using up to 25% quinoa flour tended to have better results. The researchers purposely chose sugar cookies for the taste test because they are plain as opposed to chocolate chip cookies which might mask any flavor from the quinoa. For the sugar cookie, a little quinoa might have an advantage, said Elizabeth Nalbandian, the study’s first author and a Ph.D. student in Ganjyal’s lab.

“I think at 10%, quinoa added a type of nutty flavor that people really liked,” she said, noting the testers liked it even more than the control whole flour cookie.

The quinoa appreciation tended to wane after about 30% substitution, Nalbandian said, probably because the texture started becoming grittier. Still, she sees potential for quinoa flour particularly in the gluten-free market as many of those baked products can be low in nutritional content.

The researchers will continue working to develop and test quinoa food products, and Ganjyal noted that Nalbandian is particularly well suited for this work because she has experience in the culinary arts and holds an undergraduate degree in hospitality and business management as well as in food science. 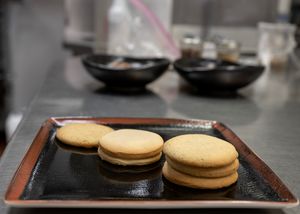 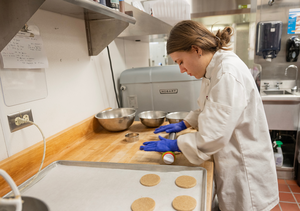