CORVALLIS, Ore. – The cockroach, reviled around the world for its sickness-causing potential and general creepiness, now occupies an important position in the study of amber fossils thanks to research by an Oregon State University scientist.

George Poinar Jr., professor emeritus in the OSU College of Science, has identified a new cockroach species. The male specimen, which Poinar named Supella dominicana, is encased in Dominican amber and is the first fossil cockroach to be found with sperm cells.

“It is well preserved with a yellow cross bar across the wings and a central, vertical, yellow stripe that appears to divide the body into two parts,” he said. “It has long spines, used for defense, on its legs, especially the hind legs. Also of interest is the sperm bundle containing spermatozoa with dark acrosomes, structures covering the head of the sperm, since fossil sperm are rare.”

The specimen, about 30 million years old, is also the only cockroach of its variety, ectobiid, to be discovered in amber from the Dominican Republic, though it has no living descendants in the Dominican or anywhere in the West Indies.

As is the case with another Supella cockroach described earlier from Mexican amber, S. dominicana’s closest living relatives are in Africa and Asia.

“So what caused these cockroaches to become extinct when it is so difficult to get rid of them today?” wondered Poinar, an international expert in using plant and animal life forms preserved in amber to learn about the biology and ecology of the distant past.

There are more than 4,000 species of cockroaches crawling around multiple habitats all over the Earth, but only about 30 types of roaches share habitat with humans, and just a handful of those are regarded as pests. But they are highly regarded as such, Poinar notes.

Ancient, primitive and extraordinarily resilient, cockroaches can survive in temperatures well below freezing and can withstand pressures of up to 900 times their body weight, he said – which means if you try to kill one by stepping on it, you probably won’t succeed.

Cockroaches are so tough that they can live for a week after being decapitated, he added, and they can scuttle at a lightning pace – their speed to body length ratio is equivalent to a human running at about 200 mph.

Since it doesn’t bother cockroaches to walk through sewage or decaying matter, they’ll potentially contaminate whatever surface they touch in your home as they search for food in the form of grease, crumbs, pantry items, even book bindings and cardboard.

“They are considered medically important insects since they are carriers of human pathogens, including bacteria that cause salmonella, staphylococcus and streptococcus,” Poinar said. “They also harbor viruses. And in addition to spreading pathogens and causing allergic reactions, just their presence is very unsettling.”

Prodigiously reproductive, able to squeeze into tiny hiding places and equipped with enzymes that protect them from toxic substances, cockroaches are not easily evicted once they show up somewhere, he said. There’s also growing evidence that they’re developing resistance to many insecticides.

“The difficulty in eliminating them from homes once they’ve taken up residence can cause a lot of stress,” Poinar said. “Many might say that the best place for a cockroach is entombed in amber.”

Poinar’s identification of the new species was published in the journal Biologia. 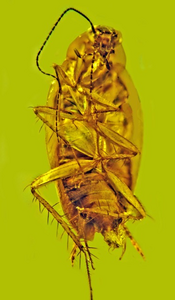 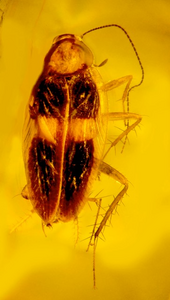