Addressing this issue, a team of researchers headed by Professor Masato Kotsugi from Tokyo University of Science, Japan, recently developed an AI-based method for analyzing material functions in a more quantitative manner. In their work published in Science and Technology of Advanced Materials: Methods, the team used topological data analysis and developed a super-hierarchical and explanatory analysis method for magnetic reversal processes. In simple words, super-hierarchical means, according to research team, the ﻿connection between micro and macro properties, which are usually treated as isolated but, in the big scheme, contribute jointly to the physical explanation.

The team quantified the complexity of the magnetic domain structures using persistent homology, a mathematical tool used in computational topology that measures topological features of data persisting across multiple scales. The team further visualized the magnetization reversal process in two-dimensional space using principal component analysis, a data analysis procedure that summarizes large datasets by smaller “summary indices,” facilitating better visualization and analysis. As Prof. Kotsugi explains, “The topological data analysis can be used for explaining the complex magnetization reversal process and evaluating the stability of the magnetic domain structure quantitatively.” The team discovered that slight changes in the structure invisible to the human eye that indicated a hidden feature dominating the metastable/stable reversal processes can be detected by this analysis. They also successfully determined the cause of the branching of the macroscopic reversal process in the original microscopic magnetic domain structure.

The novelty of this research lies in its ability to connect magnetic domain microstructures and macroscopic magnetic functions freely across hierarchies by applying the latest mathematical advances in topology and machine learning. This enables the detection of subtle microscopic changes and subsequent prediction of stable/metastable states in advance that was hitherto impossible.  “This super-hierarchical and explanatory analysis would improve the reliability of spintronics devices and our understanding of stochastic/deterministic magnetization reversal phenomena,” says Prof. Kotsugi.

Interestingly, the new algorithm, with its superior explanatory capability, can also be applied to study chaotic phenomenon as the butterfly effect. On the technological front, it could potentially improve the reliability of next generation magnetic memory writing, aid the development of new hardware for the next generation of devices.

With a mission of “Creating science and technology for the harmonious development of nature, human beings, and society", TUS has undertaken a wide range of research from basic to applied science. TUS has embraced a multidisciplinary approach to research and undertaken intensive study in some of today's most vital fields. TUS is a meritocracy where the best in science is recognized and nurtured. It is the only private university in Japan that has produced a Nobel Prize winner and the only private university in Asia to produce Nobel Prize winners within the natural sciences field.

About Professor Masato Kotsugi from Tokyo University of Science
Professor Masato Kotsugi graduated from Sophia University, Japan, in 1996 and subsequently received his Ph.D. from the Graduate School of Engineering Science at Osaka University, Japan in 2001. He joined the Tokyo University of Science in 2015 as a lecturer and is currently a Professor at the Faculty of Advanced Engineering, Department of Materials Science and Technology. Prof. Kotsugi and his students conduct cutting-edge research on high-performance materials to create a green energy society. He has published over 127 refereed papers and is currently interested in solid-state physics, magnetism, synchrotron radiation, and materials informatics. He can be reached at: kotsugi@rs.tus.ac.jp 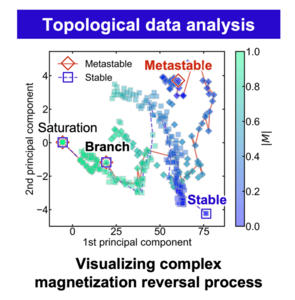 Understanding magnetic domain structures and the butterfly effect with machine learning and topology.