Palmyra Atoll (December 12, 2022) - In the middle of the Pacific Ocean is an uninhabited atoll that houses underground mycorrhizal networks that may have evolved a unique ability to cycle nutrients between seabirds, rainforest trees, and coral reefs. The Society for the Protection of Underground Networks (SPUN) travelled to this remote atoll – a place so untouched that researchers had to freeze their clothes each night to prevent the introduction of non-native species to the protected islands – for a recent research expedition.

In partnership with The Nature Conservancy Climate Adaptation Lab, SPUN is mapping the diversity of mycorrhizal fungi across Palmyra Atoll, 1,000 miles south of Hawai’i. This atoll, the Earth’s most remote, is the site of much lore, including a double murder, sunken treasure, and disappearing aircrafts. It is also home to a million seabirds, untouched coral reefs, and a fish population that is 44% sharks.

“Never could I have imaged sampling fungi while small sharks swam around my feet. As we hiked in the ocean between forested islands, we could hardly hear ourselves talk because the birds were so loud,” says Dr. Toby Kiers, Executive Director of SPUN. “Visiting Palmyra allows you to go back in time when other organisms – not humans – dominated the landscape.”

The scientists sampling Palmyra hope to understand how mycorrhizal fungi facilitate nutrient movement between the sea and the rainforest – and how remote island ecosystems are coping with climate change, invasive species, and rising sea levels. During the course of the expedition, SPUN scientists collected samples from across 27 islands. These have been sent off for DNA sequencing so that the fungal players can be identified.

Among the island’s species is the towering Pisonia tree. Pisonia is a native rainforest species that has been reported to digest seabirds that get trapped by the sticky substance secreted by its seeds. Kiers and her team conducted extensive sampling of the symbiotic fungi that colonize Pisonia roots to test how nutrients from birds and their guano are captured and fed back to the rainforest trees. Scientists believe that these mycorrhizal fungi create nutrient feedback loops that not only support the island’s rainforests, but also the plankton communities and coral reefs offshore.

“On these remote islands – out of reach of human interference – we see an extreme form of interdependence among organisms on land and sea,” says Kiers.  Lose any of these organisms – fungi, crab, birds, tree, corals – and we may witness a devastating cascade effect.

The waters surrounding the atoll host some of the most pristine coral populations in the world. “We know fungi play an important role in mediating the transport and availability of beneficial nutrients to plants. Now, an understanding of similar fungi-coral interactions is emerging,” says Dr. Alex Wegmann, lead scientist for the Nature conservancy’s Palmyra Program. “Palmyra’s intact reef system provides an excellent opportunity to more fully understand the beneficial role of fungi in island and reef ecosystem resilience to climate impacts, like rising ocean temperatures and changing ocean chemistry.”

Palmyra Atoll is also home to the largest crab species in the world. Coconut crabs grow up to a meter wide and are prolific hunters and tree climbers. The science team has hypothesized that these land crabs are helping to distribute the symbiotic fungi to new roots through their digging, re-enforcing the cycling of nutrient among birds, crabs, coral reefs and native rainforest.

Until now, the fungal communities of the atoll had never been studied, and researchers anticipate the discovery of new species able to withstand extreme heat, salinity and low nutrient conditions. Despite being so remote, the islands have been threatened by invasive species. The Nature Conservancy has removed over 1 million non-native coconut palms and eradicated large populations of introduced brown rats. And, as sea levels around the islands rise, erosion is beginning to eat away at Palmyra.

“As the world continues to push past atmospheric carbon thresholds tied to near-future climate impacts, we need to steady for what’s to come,” says Wegmann. “Understanding the role fungi play in the transport and mediation of beneficial nutrients on land and in the ocean will help prioritize conservation actions that promote and safeguard ecosystem resilience.”

The expedition was led by Professor Toby Kiers, who was recently named as one of TIME’s emerging leaders of 2022 for her work decoding complex trade interactions among plants and mycorrhizal fungi.

SPUN (Society for the Protection of Underground Networks) is a science-based initiative to map and protect the mycorrhizal networks that regulate the Earth’s climate and ecosystems. In collaboration with researchers and local communities, SPUN is leading efforts to explore mycorrhizal biodiversity and advocating for the inclusion of fungi in conservation and climate agendas. Visit https://spun.earth/.

The Nature Conservancy is a global non-profit organization dedicated to conserving the lands and waters on which all life depends. Informed by science and guided by traditional values and practices, we apply innovative, nature-based solutions to our world’s toughest challenges so that nature and people can thrive. TNC has forged partnerships to manage 14 preserves and other sites in Hawai‘i and Palmyra Atoll, working with government, private parties and communities to protect Hawai‘i’s and Palmyra’s forests and coral reefs for their ecological value and for the many benefits they provide to people. Visit www.nature.org/HawaiiPalmyra.

SPUN (Society for the Protection of Underground Networks) 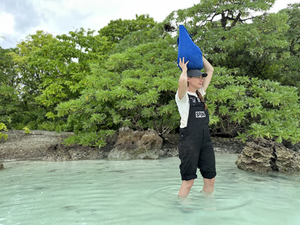 Toby Kiers carries supplies to a sampling site on an islet 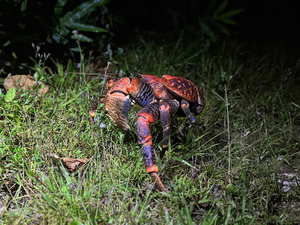 A giant coconut crab scuttles around Palmyra by night 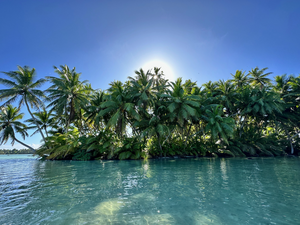 An islet of the Palmyra Atoll 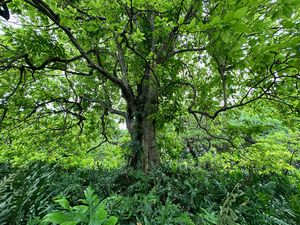 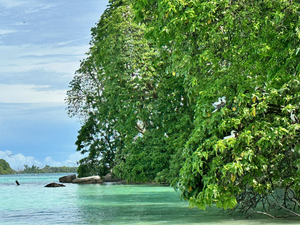 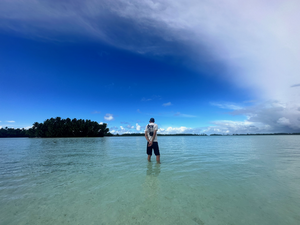 A SPUN researchers surveys the water near a sampling site