Getting a spacecraft to the Moon or Mars is quite literally rocket science. While rocket science helps deliver the spacecraft to the Moon, other areas of science are needed to sustain life and enable activities during trips to the Moon and while on the lunar surface. Experiments aboard the International Space Station serve as the basis for much of that science and are helping lay a foundation for the Artemis missions.

On November 16, NASA launched the Orion spacecraft atop the Space Launch System (SLS) rocket on the Artemis I flight test. While the uncrewed flight will help NASA understand the performance of the rocket and spacecraft in the deep space environment, the agency is also working to develop the capabilities needed for future Artemis missions. These missions will return astronauts to the lunar surface, develop the infrastructure needed to establish a long-term presence on the Moon, and act as a stepping stone for sending astronauts to Mars.

Artemis astronauts will need to live and work in deep space and traverse the lunar surface during days- or weeks-long expeditions. Ongoing scientific investigations and technology demonstrations on the International Space Station can help create solutions to many of the hurdles associated with missions to the Moon and Mars.

Here’s how some of the work on the orbiting lab could help address challenges ahead as we journey back to the Moon, to Mars, and beyond.

Humans need food and water to survive, but during longer missions, the quality and nutritional value of packaged food can degrade.  An ample amount of food is vital to sustain and supplement the crew during missions at the Moon and across the solar system. The space station’s eXposed Root On-Orbit Test System (XROOTS) experiment uses aeroponic and hydroponic systems to grow fresh food without the need for traditional growth media. Results could lead to large-scale food production systems while lowering the weight requirements for these systems and fresh food needing to be launched, allowing more room for other valuable cargo. Currently, the space station offers the only facility for studying plant growth in microgravity, ultimately developing technologies for maximizing crop production. Here on the ground, XROOTS could contribute to improved food security by enhancing crop cultivation.

There are many other studies of plant growth on station too! Learn more here.

Water makes up about 60% of the human body and is critical for health, sanitation, and irrigation. To provide enough water for long-duration missions, systems need to recover about 98% of water used by the crew. On the space station, researchers are working towards this goal. One device being tested is the ECLSS: Brine Processor System which demonstrates a technology to recover additional water from crew urine and reduce water waste. Special membranes in the system retain contaminates and pass water vapor into the cabin’s atmosphere where it is captured and delivered to a water processing system. The system can also provide clean air and support the development of technologies needed for future missions. The method has potential applications on Earth in remote settings with limited access to water as well.

The Challenge: Infrastructure and materials needed to work and live-in space

Astronauts exploring our galaxy need spare parts, tools, and materials available on demand. Continuous cargo resupply is impractical as missions travel farther from Earth, but creative solutions such as 3D printing could be the answer. 3D Printing In Zero-G produced dozens of parts on the station, proving that additive manufacturing and 3D printers work in microgravity. This experiment could be the first step toward establishing a machine shop for long-duration missions and even offer a way to recycle plastic materials. Improving 3D printing could be beneficial to industries on Earth as well.

Habitats and infrastructure are other important components of living and working in space. Microgravity Investigation of Cement Solidification (MICS) studies the complex process of cement hardening. In the absence of gravity, the microstructure of solidified cement is considerably different from concrete hardened on Earth. The study evaluates the microstructure and material properties of cement and tests responses to different thermal and mechanical loading, which could lead to ways to use this material to build lightweight space structures. Results also could improve the properties of cement used on Earth and lower the carbon dioxide emissions generated by its production.

The Challenge: Limited access to medical treatment for injuries

In space, there is no hospital or ambulance to call for an emergency. Research on the orbiting lab is equipping crews for missions without the need for immediate medical support by testing innovative technology such as Bioprint FirstAid. This ESA (European Space Agency) experiment demonstrates a device that could 3D print a custom wound patch on demand using a bioink made from the patient’s cells, a method which could accelerate the healing process. On Earth, such custom wound patches could provide patients with personalized and portable treatment options.

These are just some of the many challenges ahead as we prepare for missions to the Moon, Mars, and beyond, and only a few of the possible solutions tested on the space station. As the Artemis missions work to establish a long-term presence on the Moon and the space station continues its decade of results, missions taking humans farther from Earth are closer than ever before.

Space station solutions for Artemis missions to the Moon and beyond 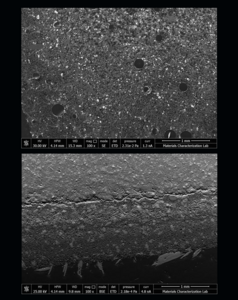 These images compare cement pastes mixed in space (above) and on the ground (below). 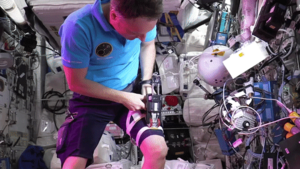