Cooked breadfruit often has a potato-like consistency that grows softer, sweeter, and more custard-like as the mature fruit ripens fully. While you may never have tasted it before, it has been an important crop for thousands of years in its native Oceania and for over 200 years in the Caribbean. With interest growing in breadfruit’s potential as a nutritious and valuable staple food around the world, a new study published in the journal Current Biology on January 5, elucidating 230 years of the crop’s Caribbean history, may have implications for the crop’s future.

“An individual [breadfruit] tree can produce fruit for decades and requires much lower use of energy and resources than major annual staple crops that must be replanted each year and that often require high inputs of petrochemicals,” says Nyree Zerega, of Northwestern University, Evanston, IL. “Another bonus is that the trees sequester carbon during their decades-long life, and breadfruit grows in tropical regions that often rely on high levels of imported food, so it can advance food security and sovereignty.”

Breadfruit also appears rather climate resilient. “It should fare better than some major crops under climate change scenarios and can be utilized in a variety of ways,” Zerega added.

Most Caribbean breadfruit came from a single introduction from Oceania to St. Vincent in 1793. It was introduced by the British on the HMS Providence to serve as a cheap source of food for slaves forced to work on British plantations. Hundreds of breadfruit cultivars are documented in the crop’s native Oceania. But which ones were introduced to the Caribbean all those years ago has long remained a mystery. Logs from the Providence indicated that five kinds were introduced, but in St. Vincent alone, over two dozen names are recognized today.

In the new study, Zerega and colleagues integrated local names, historical documents, and specimens together with genetic and other data. All told, they identified eight major breadfruit genetic lineages, including five found in the Caribbean. They were able to make several likely matches of Caribbean cultivars to their related cultivars in Oceania. However, they report that many other cultivars are too similar to one another to tell the differences among them and trace their histories.

“It was interesting that the number of kinds of breadfruit that were reported to have been originally introduced to the Caribbean was in line with the number of broad genetic lineages that DNA sequence data identified 230 years later—yet name diversity was far greater,” Zerega said. “There are still many fascinating details to uncover, and this highlights the challenges and intrigue of reconstructing genetic histories of crop species that have co-evolved with humans.”

“It begs the question of how many new types may have been selected for over the last 230 years [breadfruit] has been in the Caribbean,” she continued. “It is biologically plausible that new variation could have occurred, even in a clonally propagated tree. However, genetic differences may be so small that even if they are there, they have been difficult to detect.”

Her team plans to continue their investigations in hopes of sorting it all out, noting that the diversity of names has cultural value even if there isn’t measurable underlying diversity behind them. The findings have important implications for breadfruit’s intriguing past and promising future.

“Wherever breadfruit grows in the Caribbean today, it serves as a living reminder to the Pacific Islanders who domesticated and perpetuated this crop, and who shared their knowledge and expertise to facilitate its travel across the world, and to the Caribbean Islanders who have worked to make it thrive there for 230 years,” the authors write. “The study identified direct links between cultivars with common histories but that had been separated by centuries and thousands of miles. These links build collective knowledge that can be used to inform breadfruit use and management.” 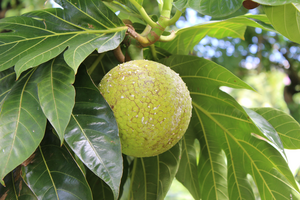 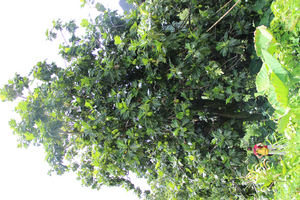