Scientists have discovered for the first time that invasive rats on tropical islands are affecting the territorial behaviour of fish on surrounding coral reefs.

The new study, led by scientists from Lancaster University in the UK and involving researchers from Lakehead University, Canada, shows that the presence of invasive black rats on tropical islands is causing changes in the territorial behaviour of the jewel damselfish - a herbivorous species of tropical reef fish that ‘farm’ algae in the branches of corals.

The study, published in Nature Ecology and Evolution, compared five rat-infested and five rat-free islands in a remote island archipelago in the Indian Ocean. The rats, which in many cases arrived on the islands as stowaways on ships in the 1700s, change damselfish behaviour by disrupting an important nutrient cycle. Seabirds travel out into the open ocean to feed and return to nest on islands. The seabirds then deposit nutrients, through their droppings onto the islands and many of these nutrients are subsequently washed into the seas, fertilising the surrounding coral reef ecosystems.

On islands with invasive rats, the rodents attack and eat small resident seabirds and their eggs, decimating their populations to the extent that seabird densities are up to 720 times smaller on rat-infested islands.

This results in a drop-off of nutrients in the seas surrounding rat-infested islands, with 251 times less nitrogen flowing onto the coral reefs around these islands, lowering the nutrient content of seaweed for herbivorous fish.

Around islands with intact seabird populations, the farming damselfish aggressively defend their small patch, typically less than half a square metre, of the reef to protect their food source – turf algae.

Dr Rachel Gunn, who conducted the research as part of her PhD studies at Lancaster University and who is now at Tuebingen University, Germany, said: “Jewel damselfish around rat-free islands aggressively defend their turf because the higher enriched nutrient content means they get ‘more for their money’, and this makes it worth the energy cost needed to defend. Conversely, the fish around rat-infested islands behave less aggressively. We believe that the presence of rats is lowering the nutritional benefit of the turf to the extent that it is almost not worth fighting for, which is what we are observing with these behaviour changes.”

The reduction of nutrients due to the presence of rats, and these associated fish behaviour changes, could potentially have wider implications for the spread of different species of coral, the distribution of other reef fish, and over generations the resilience of damselfish due to changes in hereditary traits.

Dr Gunn: “The algal farming of damselfish affects the balance of corals and algae on the reef. Their aggression towards other fish can influence the way those fish move around and use the reef. We do not yet know what the consequence of this behavioural change will be but ecosystems evolve a delicate balance over long time-scales, so any disruption could have knock-on consequences for the wider ecosystem.”

Dr Sally Keith, Senior Lecturer in Marine Biology at Lancaster University and Principal Investigator of the study, said: “Changes in behaviour are often the first response of animals to environmental change, and can scale up to affect if, how and when species can live alongside one another. Our research is the first to show that these broader impacts can even be felt across biomes, from terrestrial invaders to marine farmers. It also shows the power of leveraging real-world environmental variation across multiple locations as an approach to understand animal behaviour.”

The study adds further to the evidence base behind the need to eradicate invasive rat populations from tropical islands.

Dr Gunn said: ‘We have provided more evidence that invasive rats have a large impact on both terrestrial and marine ecosystems. Rat eradication has the potential to have multiple, cross-ecosystem benefits. The removal of invasive rats could restore the territorial behaviour of farming damselfish, which could scale up to benefit coral reef community composition and resilience.

The results of the study, which was supported by the Bertarelli Foundation and the Natural Environment Research Council (NERC), are published in the paper ‘Terrestrial invasive species alter marine vertebrate behaviour.’ 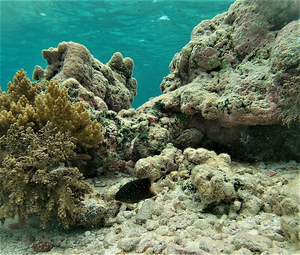