A study carried out at the Centro Nacional de Investigaciones Cardiovasculares (CNIC) heralds a paradigm change in the field of mechanobiology. The study reveals that cells respond to forces of differing strength using use two distinct mechanisms, one mediated by minute, cup-like invaginations on the cell surface called caveolae and the other by newly discovered large membrane depressions the study authors call dolines.

Study coordinator Miguel Ángel del Pozo, who heads the Mechanoadaptation and Caveolae Biology group at the CNIC, explained that the Nature Cell Biology study resolves controversies in this field. “Our results demonstrate that caveolae play an essential role in tissues that are subject to large mechanical forces (like skeletal muscle, heart muscle, blood vessels, and adipose tissue), whereas the newly identified dolines are important for the response to weak or medium-strength forces.”

These findings could trigger a reinterpretation of pathological processes such as atherosclerosis (a question the research team is now investigating in the AtheroConvergence project, funded by la Caixa and coordinated by MA del Pozo), tumor progression, and neurodegenerative diseases, where mechanobiology is helping to resolve challenging questions.

The immense contribution of mechanobiology approaches is attested by recent international recognition. The 2021 Nobel Prize for Medicine was awarded to David Julius and Ardem Patapoutian for their work on temperature and touch (mechanical) receptors. More recently, the Lasker Award for 2022 was awarded to Richard O. Hynes, Erkki Ruoslahti, and Timothy A. Springer for their work on integrins, mechanosensor mediators of cell adhesion to the extracellular matrix.

Cells are constantly subjected to mechanical forces of different types and intensities originating in the local microenvironment, such as blood flow, the contraction and stretching of muscle, etc. To allow cells to respond and adapt their function to these stimuli, evolution has provided them with mechanisms for detecting different types of forces.

The most well-known structures with this capacity are caveolae (‘small caves’ in Latin). “These tiny invaginations in the plasma membrane [the outer envelope of the cell] are present on many types of cells and detect mechanical stimuli through changes in their physical shape. Caveolae flatten when cells swell or are stretched, rather like creases in a dress. But they reform and congregate when the cell membrane is relaxed,” said Miguel Ángel del Pozo.

These changes modulate biochemical signaling networks in the cell, making caveolae not only mechanical adaptors, but also transducers of mechanical information.

Fidel-Nicolás Lolo, who led the research together with Dr. del Pozo, said that caveolae “are able to ‘read’ the physical environment and translate this information into cellular chemistry, enabling cells to adapt appropriately to local microenvironmental demands.” However, Dr. Lolo underlined that “before this study, it was unclear if this key function required the invagination of fully formed caveolae or if the individual components caveolin-1 and cavin-1 were sufficient by themselves.”

To investigate this question, the CNIC scientists set up a collaboration with biophysicist Pere Roca-Cusachs (Universidad de Barcelona-IBEC) to use magnetic tweezers to “elucidate which element is the mechanical sensor and which is the signal transducer,” explained Miguel Ángel del Pozo.

In addition to these experiments, the study collected many other biophysical parameters through partnerships with Spanish and international laboratories, including those led by Jochen Guck (Max Planck Institute, Erlangen,), Daniel Navajas and Xavier Trepat (IBEC, Barcelona), and Christophe Lamaze (Institut Curie, Paris). The collected data demonstrated that cells expressing caveolin-1 but not cavin-1 sustained a mechanical response similar to that of cells expressing both proteins (and thus able to form caveolae).

This surprising finding challenged the central role of caveolae in mechanobiology and prompted the CNIC scientists to investigate the difference between the functions of caveolae and those of isolated caveolin-1, a task that “turned out not to be so straightforward,” in the words of Dr. Fidel Lolo.

Dr. del Pozo observed that “sometimes in science, the Eureka moment comes when you try an unconventional approach. On this occasion, we embarked on an intellectually stimulating collaboration with the mathematicians Marino Arroyo and Nikhil Walani, who devised computer simulations that predicted a differential response to the level of tension in the cell membrane, in which caveolae (containing caveolin-1 and cavin-1) only respond above a relatively high force threshold, whereas caveolin-1 by itself is able to form larger membrane depressions with a different shape that are able sense and flatten in response to weak and medium-strength forces.”

Spurred by these theoretical modeling data, the team worked with Britta Qualmann, Michael Kessels, and Eric Seemann at the University of Jenna in Germany. These pioneers in an advanced electron microscopy technique called FRIL (freeze fracture replica immunogold labeling) managed to detect the predicted membrane depressions formed by caveolin-1 in the absence of caveolae.

The CNIC team gave these larger membrane depressions the name doline, based on their resemblance to the sinkholes of that name caused by karst weathering, such as the Dolina Trench at Atapuerca to the north of Burgos in Spain that was once occupied by Homo Antecessor.

The response of caveolae is a binary switch that is activated only above a high force threshold and takes several minutes. In contrast, the response of the caveolin-1–only structures is gradual, continuous, and immediate (taking seconds) and is activated by small increases in force.

Dr. Lolo suggested that “dolines may be especially important in cells like lymphocytes or neurons that don’t form caveolae but do express caveolin-1. These cells would thus be adapted to respond to more subtle microenvironmental forces in the tissues where they reside.”

Dr. del Pozo emphasized that the study would have been impossible without a multidisciplinary approach. “Sometimes when your research is stuck, modeling the phenomenon with the help of a mathematician can help to get through the impasse to the Eureka moment!” 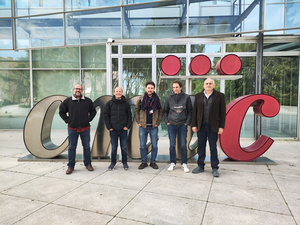 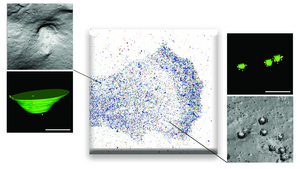