It is now widely accepted that birds are descended from dinosaurs. It is also understood that this transition encompasses some of the most dramatic transformations morphologically, functionally, and ecologically, thus eventually giving rise to the characteristic bird body plan.

However, paleontologists still scratch their heads to understand how this fantastic evolutionary event occurred.

Now, a new, complete 120-million-year-old fossil bird from China further complicates this issue by exhibiting a dinosaur-like skull articulated with a bird-like body. In addition, the fossil specimen, named Cratonavis zhui, preserves a surprisingly elongate scapula and first metatarsal, making it stand out from all other birds including fossil ones.

The study, published in Nature Ecology & Evolution on Jan. 2, was conducted by paleontologists from the Institute of Vertebrate Paleontology and Paleoanthropology (IVPP) of the Chinese Academy of Sciences.

Cratonavis is positioned between the more reptile-like long-tailed Archaeopteryx and the Ornithothoraces (which had already evolved many traits of modern birds) in the avian evolutionary tree.

To study the fossil skull, the scientists first used high-resolution computed tomography (CT)-scanning. They then digitally removed the bones from their rocky tomb and reconstructed the original shape and function of the skull.

The result demonstrates that the Cratonavis skull is morphologically nearly identical to that of dinosaurs such as Tyrannosaurus rex rather than being bird-like. "The primitive cranial features speak to the fact that most Cretaceous birds such as Cratonavis could not move their upper bill independently with respect to the braincase and lower jaw, a functional innovation widely distributed among living birds that contributes to their enormous ecological diversity," said Dr. LI Zhiheng, a lead author of the study.

As for the bizarre scapula and metatarsal in Cratonavis, Dr. WANG Min, a lead and corresponding author of this study, said, "The scapula is functionally vital to avian flight, and it conveys stability and flexibility. We trace changes of the scapula across the Theropod-Bird transition, and posit that the elongate scapula could augment the mechanical advantage of muscle for humerus retraction/rotation, which compensates for the overall underdeveloped flight apparatus in this early bird, and these differences represent morphological experimentation in volant behavior early in bird diversification."

The new study shows that the first metatarsal was subjected to selection during the dinosaur-bird transition that favored a shorter bone. It then lost its evolutionary lability once it reached its optimal size, less than a quarter of the length of the second metatarsal.

"However, increased evolutionary lability was present among Mesozoic birds and their dinosaur kins, which may have resulted from conflicting demands associated with its direct employment of the hallux in locomotion and feeding," said coauthor Dr. Thomas Stidham. For Cratonavis, such an elongate hallux likely stems from selection for raptorial behavior.

The aberrant morphologies of the scapula and metatarsals preserved in Cratonavis highlight the breadth of skeletal plasticity in early birds, said coauthor Dr. ZHOU Zhonghe. Changes in these elements across the theropod tree show clade-specific evolutionary lability resulting from the interplay among development, natural selection, and ecological opportunity. 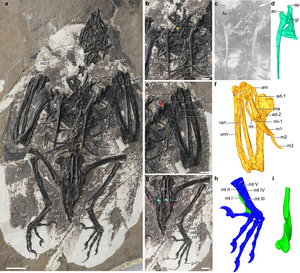 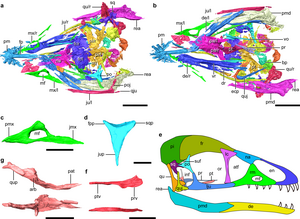 Digital reconstruction of the skull of Cratonavis zhui 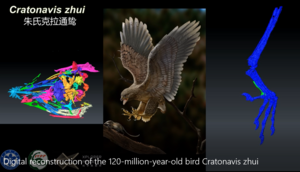