EVANSTON, Ill. — In 1793, Capt. William Bligh docked the HMS Providence in Kingstown in St. Vincent and the Grenadines, a small island nation in the Caribbean Sea, with cargo filled with several hundred sapling breadfruit trees. His goal was singular: To introduce the long-lived trees with their carbohydrate-rich fruits to cheaply feed Britain’s slaves, who labored on the islands’ sugar plantations.

Now, 230 years later, a plant biology team led by Northwestern University, the Chicago Botanic Garden and the St. Vincent Botanical Gardens has, for the first time, traced five major lineages of Caribbean breadfruit back to that single introduction from Bligh’s voyage.

Not only have the original breadfruit tree cultivars (or varieties produced by selective breeding) survived for centuries, they also are thriving, the researchers found.

The study will be published on Jan. 5, 2023 — the 230th anniversary of Bligh’s arrival in the Caribbean — in the journal Current Biology.

“Breadfruit is an underutilized crop, and it doesn’t get nearly as much attention as the major crops,” said Nyree Zerega, the study’s senior author. “However, interest in breadfruit is increasing globally, and we thought this would be a fascinating puzzle to solve.”

“Outside of Oceania, the Caribbean is one of the largest producers of breadfruit worldwide,” added Lauren Audi, the study’s first author. “And we really don’t know much about the genetic diversity of the fruit in the Caribbean. Because this is an important crop for food security — especially for island nations that are highly susceptible to climate change — we wanted to characterize the genetic diversity of breadfruit crops in order to conserve them. The first step for that is to characterize the diversity of what we already have.”

A breadfruit expert, Zerega is director of the Program in Plant Biology and Conservation, a partnership between Northwestern’s Weinberg College of Arts and Sciences and the Chicago Botanic Garden, and a conservation scientist with the Negaunee Institute for Plant Conservation Science and Action at the Chicago Botanic Garden. Audi was a graduate student in Zerega’s laboratory at the time of the research. Now, she is a lab manager at the Sackler Institute for Comparative Genomics at the American Museum of Natural History in New York City and a Ph.D. candidate at New York University.

Breadfruit on the ‘Bounty’

Many people might be familiar with Capt. Bligh from “Mutiny on the Bounty,” a classic book series and film starring Clark Gable that fictionalized the arduous journey and mission’s ultimate failure. (The film was later remade twice — with Marlon Brando in 1962 and Anthony Hopkins in 1984.)

Aboard a British Royal Navy vessel called the HMS Bounty, Capt. Bligh and his crew stopped in Tahiti, where they worked with locals to collect breadfruit. The goal was to introduce breadfruit as a cheap food for slave populations forced to work on British plantations in the Caribbean islands. But these plans were abruptly abandoned in April 1789 when the Bounty’s crew seized control of the ship, throwing Bligh and his 18 loyalists overboard.

Yet Bligh survived — and remained dedicated to the original goal of collecting and transporting breadfruit. Just two years later, he set sail again — this time on the HMS Providence with an accompanying vessel, the HMS Assistant. Although Bligh recorded names of eight types of breadfruit in his log for the Bounty, the Providence’s logs are curiously missing these crucial details.

“When you look at the logs from the Bounty, Bligh carefully documented what was collected,” Zerega said. “But on his second voyage, the time spent in Tahiti was shorter, and there weren’t any notes about the names of the breadfruit cultivars they actually collected. He did indicate that five kinds of seedless breadfruit were collected, but subsequent historical texts have suggested different numbers. Wanting to know this is partly curiosity, but it’s also useful because it links cross-cultural knowledge about the plants.”

The lack of historical records from the Providence is not the only reason why characterizing breadfruit genetic diversity in the Caribbean has been challenging. There are several genetic challenges. First, seedless breadfruit trees are triploid. In other words, they have three copies of chromosomes, instead of two (diploid), which is more common. There are not as many genetic tools designed to analyze triploids, compared to diploids.

Triploid breadfruit trees also are unable to reproduce sexually and can only survive if humans clonally propagate them. This is done with many cultivated fruit trees — even those that can sexually reproduce — to ensure quality control.

“When you bite into a Honey Crisp apple, you expect a different taste and texture than a McIntosh,” Zerega explained. “Clonal propagation ensures that you get what you expect. When plants develop seeds through sexual reproduction, they give rise to variation in offspring — just like the variation among human siblings.”

Over thousands of years of clonal propagation, however, variation can still arise due to somatic mutations, which are mutations in the tree’s non-reproductive cells. Somatic mutations can occur spontaneously, due to stress or errors in DNA repair. In search of the best fruits, humans sometimes select the part of the plant where the somatic mutation occurred and propagate it. So, if the mutation gives rise to a desirable new leaf or fruit type, people can cut the branch where the mutation occurred, propagate it and essentially clone that new mutation to grow a tree with the desirable fruit again.

Whatever mutation gave rise to the change can be extremely tiny and difficult to pinpoint genetically. Detecting DNA differences across different clonal lines (that is, lineages that arose from different historical “mother” trees) is much easier than detecting differences due to mutations within the same clonal line. Nonetheless, all seedless breadfruit cultivars are quite similar, making it challenging to genetically characterize different cultivars.

Finally, both within and across island groups in the Pacific and the Caribbean, people use many different names for what sometimes appear to be the same cultivars. This adds to the confusion when characterizing diversity.

To overcome these challenges, the researchers employed a variety of tools. They integrated local knowledge with historical documents and specimens, morphological data (observations about the fruits’ size, shape and texture) and targeted genome sequencing.

Partnering with the St. Vincent Botanical Gardens, the St. Vincent Ministry of Tourism and the St. Vincent National Parks, Rivers and Beaches Authority, members of the research team traveled throughout St. Vincent. They collected leaves and took measurements, such as leaf size, fruit size and shape. Then, they supplemented these samples with historical dried, pressed specimens stored in herbaria in museums and botanic gardens around the world — including a specimen collected in 1769 from the HMS Endeavor Voyage led by Captain James Cook.

Back in the lab at the Chicago Botanic Garden, the researchers analyzed more than 200 individual breadfruit specimens, focusing predominantly on seedless breadfruit from St. Vincent and Tahiti as well as samples from around the world. The process involved extracting and sequencing DNA from leaf samples. Among these samples, the researchers ultimately identified eight major global breadfruit lineages — five of which are found in the Caribbean and likely represent the original 1793 introduction by the HMS Providence.

Based on previous work by Zerega and others, there are many more global breadfruit lineages when the great diversity of seeded cultivars from Oceania are included. The current study focused mostly on seedless breadfruit.

“We identified five genetic lineages in the Caribbean, which matches what we found in some historical texts,” Audi said. “It was exciting to tease apart this history and characterize breadfruit’s diversity in the Caribbean genomically for the first time.”

“Still, there may be more types of breadfruit in St. Vincent than our genetic methods could identify because they are so closely related,” Zerega said. “Even if we don’t find genetic differences among plants that people assign different names to, those names still have significance and value.”

Although breadfruit began with a dark history in the Caribbean as slave food, the nutritious fruit eventually became an important part of island diet and culture. Despite having “fruit” in its name, breadfruit is starchy and seedless, playing a culinary role more like a potato. Closely related to jackfruit, the nutrient-rich food is high in fiber, vitamins and minerals. In its native Oceania where breadfruit was domesticated, people have been eating breadfruit for thousands of years — whether steamed, roasted, fried or fermented. Breadfruit also can be turned into flour, in order to lengthen its shelf life.

Once established, a single breadfruit tree can live for decades, producing a large number of fruits each year. And, because it’s a perennial crop, it also requires less energy input (water and fertilizer) than annual crops that must be replanted each year. Like other trees, it also sequesters carbon dioxide from the atmosphere.

“Food security and food sovereignty for the next millennium lies in the endless untapped possibility of breadfruit,” said Gordon J.P. Shallow, study co-author, who was curator of the St. Vincent Botanical Garden at the time of the research.

Earlier this year, Zerega and Northwestern climate scientists authored another study (published in PLOS Climate), which found that breadfruit is particularly resilient in the face of human-caused climate change. Although other staple crops struggle in hot conditions, the researchers predict that changing conditions will have less effect on breadfruit. That means it could play an important role in fighting climate-driven hunger.

The study, “Linking breadfruit cultivar names across the globe connects histories after 230 years of separation,” was supported by the Garden Club of America, Botanical Society of America, the Institute for Sustainability and Energy at Northwestern Resnick Social Impact Fund and the Northwestern University Alumnae Research Award. 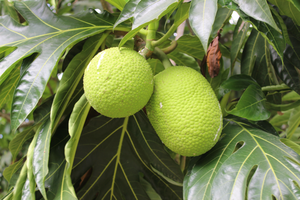