‘With their whole genomes deciphered at high resolution we have a much better window into the evolutionary history of these endangered species,’ says Professor Mahmood Shivji.

It’s a startling image that describes a milestone in conservation science for sharks. Professor Shivji, Professor Michael Stanhope and their collaborators have glanced back in history by sequencing to chromosome level the genomes (entire genetic blueprint) of great hammerhead and shortfin mako sharks. Their DNA timeline shows that their populations have declined substantially over 250,000 years. What the scientists have also found is worrying: great hammerhead sharks have low genetic variation, which makes them less resilient to adapting to our rapidly changing world. The species also shows signs of inbreeding, an issue that can lower the ability of its populations to survive. The shortfin mako shark, however, showed higher diversity and limited inbreeding, a hopeful glint in the gloomy conservation climate. Understanding change over such a large timescale can put into context the current conservation status of these endangered animals. The results can help direct us towards much more nuanced management strategies for sharks.

The findings are published in a paper in iScience: ‘Genomes of endangered great hammerhead and shortfin mako sharks reveal historic population declines and high levels of inbreeding in great hammerhead’, led by Professor Stanhope from Cornell University and Professor Shivji, director of the Save Our Seas Foundation Shark Research Center and Guy Harvey Research Institute, Nova Southeastern University, with collaborators from Cornell University, Nova Southeastern University, Temple University, Governors State University, and the San Diego Zoo Wildlife Alliance. The scientists acquired and assembled entire genome sequences for great hammerhead and shortfin mako sharks and compared their genomes with genome information available for the whale shark, white shark, brownbanded bamboo shark and cloudy catshark. Their methods read like complex puzzle-building by scientific sleuths: successively assembling from tiny fragments of DNA different sequences like a great patchwork tapestry that details the blueprint of life. Reaching chromosome level represents the latest in high-quality whole genome sequence research - and a tricky feat to achieve for species like sharks that have enormous genomes.

The application of advancing techniques comes amidst bleak reports for sharks and rays.

“Technical advances in the study of genomes mean that DNA sequencing approaches are much more powerful and efficient now”, says Professor Stanhope. “We can apply these new technologies to gain insights about the organism, information that we hope can be leveraged to protect sharks and rays”.

While we don’t know exactly the effects of inbreeding in sharks, findings from wolves and cheetahs show that problematic traits can creep in over time. The result is often lowered survival of the species. The picture for great hammerhead sharks - overfished and traded for their fins – is worrying. But without these critical genetic insights, we would be unable to modify how their vulnerable populations are currently managed.

The researchers are cautious about overstating results.

‘Genetics has advanced such that chromosomal level genomes are the expectation for a reference quality genome for species. However, conservation research presents its own challenges to achieving this consistently and at the resolution expected in other fields’. Professor Shivji adds that: ‘Obtaining tissue samples from endangered marine vertebrates is a major hurdle. You can assemble the genome with a single tissue sample from a single shark, but the ideal circumstance would be to sequence genomes from multiple individuals from different parts of their ocean range, an ethically difficult and costly endeavour.’

Indeed, the researchers state this as a limitation of their current study. The ethical limitations to working with endangered species means that conservation geneticists must balance the latest advances with respect for the fragile populations they study. In addition to revealing the genetic diversity and fragile status of two endangered shark species, the researchers hope that their results will provide what they term reference-quality genomes, from which future foundational science can build to improve what we know about sharks. Certainly, as new possibilities arise, our insights into the blueprint of sharks will help strengthen the way we understand these ecologically important species and conserve their vulnerable populations.

Breakthrough as scientists sequence the genomes of endangered sharks 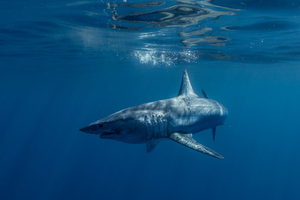