Cardiovascular disease is the leading cause of morbidity, and preclinical investigations of animal models are critical for better understanding its mechanisms. Over the last several decades, non-invasive imaging of small animal models has provided in vivo insights into the structural and functional phenotypes with physiological and clinical relevance. Photoacoustic computed tomography (PACT) is an emerging cardiac imaging technique that combines functional optical contrast from light illumination and high spatial resolution from acoustic detection. However, the majority of the published PACT prototypes have not been demonstrated for non-invasive cardiac imaging of detailed anatomical or functional phenotypes due to suboptimal illumination and detection schemes.

In a new paper published in Light Science & Application, a team of scientists, led by Professor Lihong V. Wang from the Caltech Optical Imaging Laboratory, Andrew and Peggy Cherng Department of Medical Engineering, Department of Electrical Engineering, California Institute of Technology, USA, and Professor Tzung K. Hsiai from the Department of Bioengineering and the Division of Cardiology, Department of Medicine, UCLA, USA, and co-workers have presented the three-dimensional rat whole beating heart in vivo using a recently developed three-dimensional PACT (3D-PACT) platform. With regulated illumination and detection schemes, 3D-PACT scanned the rat heart in 10 seconds and reconstructed a series of cardiac images based on a time-gating strategy. The 3D-PACT significantly enhances the image clarity and captures the dynamic changes in the cardiac structure between obese and control rats; namely, chamber size, myocardial wall thickness, and intracardiac flow. Moreover, the 3D-PACT is capable of recording the distinct blood flow in various sizes of the vascular system from healthy, obese, and hypertensive rats, including the aortas, pulmonary arteries, and left and right coronary arteries.

To address acoustic distortion from the chest ribs and lung air sacs that encompass the heart, the authors demonstrated a large acoustic detection aperture to collect photoacoustic signals from numerous view angles. Moreover, one of the biggest excitements (and challenges) in volumetric cardiac imaging is the heartbeat, which contains rich hemodynamic information but blurs the images. The authors applied time-gated reconstruction guided by the synchronized electrocardiogram (ECG) measurement to correct the motion artifacts. The 3D-PACT, along with the ECG-aided synchronization, largely resolves the challenges from the previous PACT approaches and reveals the whole rat heart anatomy and hemodynamics non-invasively. These scientists summarize the advantages of their imaging setup:

“To reveal the cardiac anatomy, 3D-PACT employs a hemispherical acoustic detection aperture with large view angles to mitigate the influences induced by ribs and lungs; The 1064-nm light and uniform illumination also facilitate deep penetration of the entire heart; The periodic heartbeat allows the ECG-guided time-gating method to reduce motion-induced artifacts during a 10-second scan.”

Successful imaging of the anatomical details further enables cardiac function and dynamics measurements. “the optical imaging contrast in 3D-PACT depicts the distribution of myoglobin in the myocardium and hemoglobin in the blood, revealing cardiac anatomy and function with physiological relevance”, they added.

“3D-PACT is an open imaging platform for preclinical research and clinical translation by simultaneously providing cardiac anatomy and function. Compared with established imaging modalities, PACT of the heart offers additional physiology-related information with high imaging speed and resolution, yet without the need for ionizing radiation or invasiveness, making PACT a promising tool for cardiac imaging of human neonates. ” the scientists forecast. 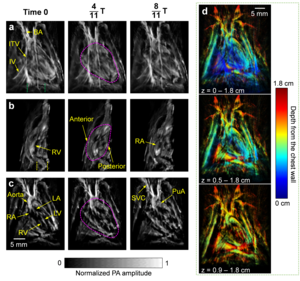