Metal oxides are a promising catalyst for photoelectrochemical (PEC) water splitting to produce hydrogen as alternative energy. However, their effectiveness is restricted at low voltage. A research team led by scholars from City University of Hong Kong (CityU), Australia and Germany successfully mediated the poor charge carrier transport at low voltage by adding phosphorus to a metal oxide catalyst, which reduced energy losses during water splitting. The findings offer a potential option for achieving carbon neutrality.

The research was co-led by Professor Ng Yun-hau of CityU’s School of Energy and Environment (SEE) and researchers from Australia and Germany. Their findings were published in the scientific journal Nature Communications, titled “Low-bias photoelectrochemical water splitting via mediating trap states and small polaron hopping”.

Bismuth vanadate (BiVO4) is a metal oxide semiconductor, which is responsive to both ultraviolet and visible light, and is regarded as a top-performing photocatalyst for PEC water splitting. “In the PEC water-splitting process, hydrogen and oxygen are produced from water, using sunlight and specialised semiconductors as photocatalysts, such as BiVO4. With light energy and an additional small voltage supply, the photocatalysts directly dissociate water molecules into hydrogen and oxygen,” explained Dr Ng, an expert in PEC research. “However, if the voltage supply is too low, a large fraction of the photo-excited charge carriers cannot be extracted efficiently, leading to energy loss and affecting the water-splitting efficiency. This poor charge transport is due mainly to the trap states of charge carriers and small polaron formation.”

With solar energy, the electrons in the semiconductor are excited, and can bounce up and across the band gap from the valence band to the conduction band to make an electric current flow. But the native defects of the semiconductor introduce “trap states”, which trap the photo-induced electrons and the positively charged holes until they recombine, preventing them from moving freely to become an electric current.

Moreover, when an electron is excited within a semiconductor, its charge can induce lattice expansion, confining the electron within the lattice unit, and forming a small polaron, which can be regarded as a deep trap state that strongly traps the electron. It requires thermal vibration energy (known as polaron hopping activation energy) to hop from one site to another. Hence, the small polaron formation has a detrimental effect on charge mobility, which is common in transition metal oxides.

The research team took on this challenge to find ways to enhance charge mobility. They found that by modifying the BiVO4 photoanodes with phosphorus doping, the charge mobility is 2.8 times higher than that of the pristine one. This also greatly increased the charge separation efficiency, up to 80% at 0.6V, which is about 1.43 times stronger than the pristine one, and up to 99% at 1.0V.

Dr Wu Hao, the first author of the paper, then-postdoc in Professor Ng’s group, and now an Assistant Professor in the Macao Institute of Materials Science and Engineering at Macau University of Science and Technology, shared one of the highlights of the study: “We discovered that the polaron hopping activation barriers of BiVO4 photoanodes were reduced upon incorporating phosphorus. This was proven by our combined theoretical and experimental studies.”

The team’s experiments and measurements also confirm that phosphorus doping passivated the trap states that are intrinsically formed on the BiVO4 surface, thereby increasing the open-circuit photovoltage for splitting water molecules.

They showed that the charge transport in phosphorus-doped BiVO4 was improved by concurrently mediating the polaron hopping barrier and trap state, thus introducing efficient PEC water splitting for hydrogen production at low voltage. The synergistic effects allowed the phosphorus-doped BiVO4 to exhibit a record-high photon-to-current conversion efficiency of 2.21% at 0.6V.

“We hope the mechanistic understanding of the enhancement of BiVO4 properties will provide key insights into trap state passivation and polaron hopping for many photoactive metal oxides, and more importantly, will offer a potential option for efficient hydrogen production to help achieve carbon neutrality,” said Professor Ng.

The first author of the research is Dr Wu, and the corresponding author is Professor Ng. Other collaborators included researchers from the Institute for Solar Fuels of Helmholtz-Zentrum Berlin für Materialien und Energie (HZB) and Queensland University of Technology.

The research was supported by the Hong Kong Research Grants Council, and the Science and Technology Innovation Committee of Shenzhen Municipality. 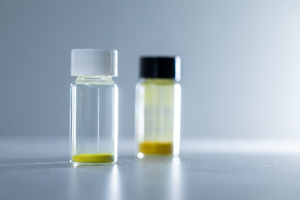 BiVO4 is a metal oxide semiconductor and a top-performing photocatalyst 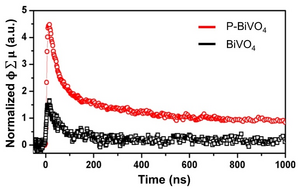