This study has examined the state changes of nutrients (N, P, and Si) from one of the top ten largest world river system, Changjiang, based on field expeditions and time-series data since early 1980s. The study covers an area of ca. 80% of the whole drainage basin (i.e. 1.8×106 km2) and 70% of water course, including main stream and 15 major tributaries.

A considerable increase in anthropogenic nutrients (e.g. N and P) appears when the river lefts the Qinghai-Tibetan Plateau, and changes in species ratio have been identified from some of the major tributaries draining through high population and extensive agriculture areas. This influence can be tracked further downstream and all way to the estuary.

Different from the previous studies, the present study provides evidence that Three Gorges Dam and the reservoir have a rather limited impact on the so called “Trapping of Nutrients”. Examination of data in 2003-2016 indicates that there is a lack of systematics (i.e. trend) between upstream the reservoir and downstream the dam, even though for dissolved silicates.

Time-series data at the river mouth since 1980s indicate a continuous increasing mode for dissolved inorganic nitrogen and phosphorus. Particularly, nitrogen in the river started to be high in early 1980s, while a considerable increase in phosphate appeared later in mid-1990s with higher rate than that for nitrogen. This makes the Changjiang outstanding in terms of loadings and species ratio for anthropogenic nutrients compared to other top-ten world river systems.

Furthermore, the present study reveals that tidal-influenced deltaic area has an important but previously ignored role in regulating seaward flux of the Changjiang. Remobilization of nutrients from the tidal-influenced deltaic area contribute additional 5%-10% for dissolve inorganic nitrogen and silicates, but up to 20% for phosphate. Such an amount of nutrients is not related to the agriculture but to coastal urbanization.

In comparison to other rivers, watersheds of the Changjiang is still in the accumulation phase for anthropogenic nutrients, and a “legacy” source can sustain relatively high concentrations in the river even in the period of reduction of application of chemical fertilizers in agriculture. Hence, management strategy needs to take into consideration of the potential of legacy source.

At drainage basin scale, the continuous increase of anthropogenic nutrients in the Changjiang is mainly regulated by the human activities, while the influence of climate variability is rather limited and not systematic based on the current data sets.

From water sources of the Tibetan Plateau to the ocean: State of nutrients of the Changjiang linked to the land-use changes and climate variability 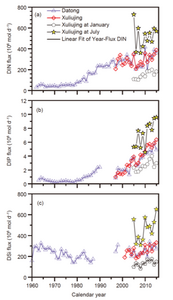 Construction of nutrient trends using time-series data at the river mouth of Changjiang, which has been maintained at monthly scale since early 1980s. 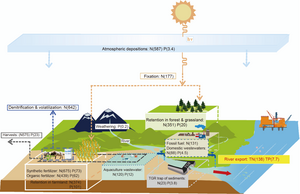 Summary of nutrient budgets for the Changjiang drainage basin, taking into consideration of major pathways.