Laser-induced breakdown spectroscopy (LIBS) is a rapid chemical analysis technology that has been well developed for trace element analyses in gases, liquids, and solids. It uses a high-power laser pulse to elicit short-lived, high-temperature plasma in a sample. As the plasma cools, it emits spectral peaks that correspond to elements in the periodic table. Recent exploration has extended LIBS via filament-induced breakdown spectroscopy (FIBS), which has better sensitivity and greater stability. Yet FIBS is intrinsically limited by the guided laser intensities in the filamentation itself.

Plasma-grating-induced breakdown spectroscopy (GIBS) could surmount the limitations of FIBS. However, efficient laser ablation in liquid has remained a great challenge because plasma excitations are hindered by the unavoidable generation of shockwaves and microbubbles, as well as dramatic liquid pressure changes surrounding the ablation region.

As reported in Advanced Photonics Nexus, researchers recently combined FIBS and GIBS as an efficient technique for sensitive detection of trace metals in liquid. They demonstrated the combination of strong nonlinear interactions of filaments (coplanar and noncollinear) with different plasma gratings, to achieve a technical innovation termed “F-GIBS” (filament- and plasma-grating-induced breakdown spectroscopy). F-GIBS was implemented by using fluid jets to analyze aqueous solutions.

This plasma excitation technique neatly avoids detrimental influence of liquid surface fluctuation and bubbles formed by the violent plasma explosions. Two femtosecond laser beams were coupled noncollinearly to establish plasma gratings covering almost the entire jet and excite the liquid sample. A third filament was aligned to couple nonlinearly with the plasma gratings in the same plane (vertical to the fluid jet). The nonlinearly coupled filaments entered the fluid jet across the air-aqueous interface with no random filament breakups.

According to senior author Heping Zeng, professor at East China Normal University’s State Key Laboratory of Precision Spectroscopy, “F-GIBS provides a promising technique for trace element detection in aqueous solutions with improved sensitivities. Regenerative excitations of plasma gratings demonstrated in this work may serve to enhance some other already-well-developed dual-pulse LIBS techniques, such as plasma reheating and laser induced fluorescence, with plasma re-excitation in much shorter time delays, facilitating convenient use of lasers from the same sources.” 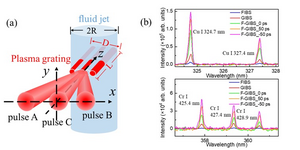