Next-generation Wireless Technology May Leverage the Human Body for Energy

AMHERST, Mass. – While you may be just starting to reap the advantages of 5G wireless technology, researchers throughout the world are already working hard on the future: 6G. One of the most promising breakthroughs in 6G telecommunications is the possibility of Visible Light Communication (VLC), which is like a wireless version of fiberoptics, using flashes of light to transmit information. Now, a team of researchers at the University of Massachusetts Amherst has announced that they have invented a low-cost, innovative way to harvest the waste energy from VLC by using the human body as an antenna. This waste energy can be recycled to power an array of wearable devices, or even, perhaps, larger electronics.

“VLC is quite simple and interesting,” says Jie Xiong, professor of information and computer sciences at UMass Amherst and the paper’s senior author. “Instead of using radio signals to send information wirelessly, it uses the light from LEDs that can turn on and off, up to one million times per second.” Part of the appeal of VLC is that the infrastructure is already everywhere—our homes, vehicles, streetlights and offices are all lit by LED bulbs, which could also be transmitting data. “Anything with a camera, like our smartphones, tablets or laptops, could be the receiver,” says Xiong.

Previously, Xiong and first author Minhao Cui, a graduate student in information and computer sciences at UMass Amherst, showed that there’s significant “leakage” of energy in VLC systems, because the LEDs also emit “side-channel RF signals,” or radio waves. If this leaked RF energy could be harvested, then it could be put to use.

The team’s first task was to design an antenna out of coiled copper wire to collect the leaked RF, which they did. But how to maximize the collection of energy?

The team experimented with all sorts of design details, from the thickness of the wire to the number of times it was coiled, but they also noticed that the efficiency of the antenna varied according to what the antenna touched. They tried resting the coil on plastic, cardboard, wood and steel, as well as touching it to walls of different thicknesses, phones powered on and off and laptops. And then Cui got the idea to see what happened when the coil was in contact with a human body.

Immediately, it became apparent that a human body is the best medium for amplifying the coil’s ability to collect leaked RF energy, up to ten times more than the bare coil alone.

After much experimentation, the team came up with “Bracelet+,” a simple coil of copper wire worn as a bracelet on the upper forearm. While the design can be adapted for wearing as a ring, belt, anklet or necklace, the bracelet seemed to offer the right balance of power harvesting and wearability.

“The design is cheap—less than fifty cents,” note the authors, whose paper won the prestigious Best Paper Award from the Association for Computing Machinery’s Conference on Embedded Networked Sensor Systems. “But Bracelet+ can reach up to micro-watts, enough to support many sensors such as on-body health monitoring sensors that require little power to work owing to their low sampling frequency and long sleep-mode duration.”

“Ultimately,” says Xiong, “we want to be able to harvest waste energy from all sorts of sources in order to power future technology.”

Next-generation wireless technology may leverage the human body for energy

The team experimented using different daily objects to amplify the harvested power, and discovered that the human body is one of the best materials. 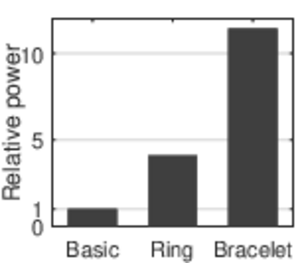