Wind turbines are built at an increasing pace but their effect on nature and animals are poorly known. Researchers from the Universities of Turku and Helsinki in Finland have investigated the impact of wind turbines on bat presence and activity in boreal forests. The results indicate clearly that bats don’t like wind turbines.

The researchers recorded bat acoustic activity for an entire summer at seven wind farms located in forests situated on the western coastline of Finland. By setting up recorders at varying distances from the wind turbines, they were able to see how bat activity and presence differed closer to the turbines as well as further away.

The researchers studied two groups of bats: the Northern bat, which is the most common species in Finland, and the Myotis, a group of five species, including the very common Daubenton’s bat.

“Our results showed that bat presence was impacted by the presence of wind turbines as both studied groups were found more often further away from the wind turbines. Northern bats were repelled up to 800 metres from the wind turbines, but for the Myotis species the negative impact of wind power was even greater than one kilometre, which was the maximum distance we studied”, summarises lead author, Doctoral Researcher Simon Gaultier from the University of Turku.

“Regarding the results, it is not yet clear if bats avoid the wind turbines themselves, or the surrounding area”, explains Simon Gaultier, and continues: “In Finland, building turbines in forests requires cutting down a number of trees and building large roads to bring turbine parts to the construction sites. Bats like the Myotis don’t like these kinds of changes and prefer dense forests with no open areas. This could be the explanation as why they tend to avoid wind farms.”

Other explanations, such as the noise and lighting emitted by wind turbines or the impact of these machines on insects, have been proposed as potential causes behind bats’ avoidance of wind farms. Regardless of the real causes, this avoidance can drive bats away from habitats that are important for their movement or feeding. This consequence is exacerbated when considering the cumulative effect of all wind turbines already operating or planned in Finland.

“More and more wind farms are being built or planned every year, especially on the western coastline where the winds are stronger. All these future turbines will likely have the same repelling effect on bats”, points out Academy Research Fellow Thomas Lilley from the University of Helsinki, another author of the study.

At the moment, up to 7 percent of the total area in Finland is impacted by the presence of existing or planned wind turbines. At the same time, bats’ migration routes go through western Finland making it of key importance for bats, but also the same area where most of the country’s wind power is being planned.

Because the reasons for bats’ avoidance of wind power are not clearly understood yet, the authors recommend further research on the topic. They emphasise that although clean energy production is greatly needed, biodiversity has to be protected at the same time.

The presence of wind turbines repels bats in boreal forests 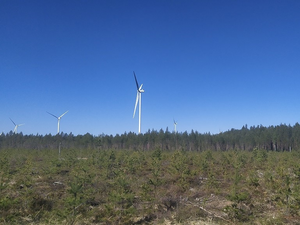