Nacre-like architectures are bio-inspired structures that perform well as impact-resistant templates at static or specific low-speed loads. Recently, a research team led by Prof. NI Yong and Prof. HE Linghui from the University of Science and Technology (USTC) found that nacre-like structures dissipate less energy than laminated structures when impact velocity exceeds a critical value. Further, they designed a hybrid architecture to cope with a wide range of impact velocities. Their research was published in Nature Communications.

The team also revealed the relations between the critical impact velocity and the structural sizes and boundary conditions, which explained why the natural nacre with nanoscale multi-layered structures would be crushed when the impact velocity of the predators is above ranging from 14.7 to 23.5 m/s.

This work provided a simple and effective strategy that can be applied to other structures in the future to enhance resistance performance in a wider range of impact velocities.

Jane Fan
University of Science and Technology of China
qfan@ustc.edu.cn 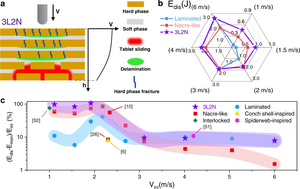