CHAMPAIGN, Ill. — A new DNA-collection approach allows scientists to capture genetic information from wildlife without disturbing the animals or putting their own safety in jeopardy. The protocol, tested on elephant dung, yielded enough DNA to sequence whole genomes not only of the elephants but also of the associated microbes, plants, parasites and other organisms – at a fraction of the cost of current approaches.

The researchers report their findings in the journal Frontiers in Genetics.

“We combined existing methodologies in such a way that we are now able to use noninvasive samples to generate genome-scale data,” said Alida de Flamingh, a postdoctoral researcher at the University of Illinois Urbana-Champaign who led the work with U. of I. animal sciences professor Alfred Roca. “This allows us to assess wildlife populations without having to dart, capture or immobilize animals.”

Collecting DNA from elephant dung is not new, Roca said.

“Elephant fecal samples have been used for decades to study the genetics of elephants,” he said. “But this relies on very cumbersome methods, often involving chemicals that in some cases may be dangerous. The collections are bulky, they’re hard to ship and they have to be refrigerated, making the whole process very costly."

De Flamingh tested a relatively inexpensive alternative: using postcard-sized data-collection cards that have been treated to prevent the samples from degrading. Previous research has shown that once samples are smeared on the cards, they can be stored for months without refrigeration.

The inspiration for the study came from de Flamingh’s work with U. of I. anthropology professor and study co-author Ripan Malhi, whose laboratory focuses on ancient DNA.

“Ancient DNA can be problematic because samples are degraded and may yield very low levels of target species DNA,” de Flamingh said. Obtaining genomic data from dung can be similarly challenging, with lower elephant DNA concentrations than are available from blood samples. “I thought, this sounds like an excellent opportunity to test whether the same methodologies can be applied to noninvasive samples to generate the same type of data.”

The team first collected samples from zoo elephants in experiments designed to determine how long after defecation the dung would yield viable genomic data. The Jacksonville Zoo and Gardens in Florida and the Dallas Zoological Gardens allowed the team to collect samples from their African savanna elephants. The researchers retrieved the samples immediately after defecation and 24, 48 and 72 hours later.

Their tests revealed that even three-day-old dung yielded enough DNA for genomic studies of the elephants.

The researchers next tested their approach on samples collected from wild African savanna elephants. Study collaborator and co-author Rudi van Aarde, a professor emeritus of zoology and entomology at the University of Pretoria, South Africa, and his colleagues used the cards to collect elephant dung samples after identifying a geographically and ecologically diverse set of wild areas across South Africa.

By running the sequence data obtained from the cards through genomic databases, the team found a treasure trove of information in the dung.

“I was surprised,” Roca said. “I thought we might get some elephant DNA from the cards, but I was thinking on the order of 2%. However, on average, more than 12% of the DNA was attributed to the elephant.”

This was achieved without using laboratory methods that target only elephant DNA, a costly and time-consuming procedure, the researchers said. As a result, each sample yielded a vast amount of data about the elephant, the microbial composition of its gut, its habitat and diet. The researchers even detected the DNA of butterflies and other arthropods that interact with the dung after it is deposited.

“It’s really beneficial to get an idea of everything that’s in there because now you can start asking questions, not only about elephant genomes but also about things like their health, their diet and whether there are pathogens or parasites present,” de Flamingh said.

When it comes to the elephant genomes, the results are comparable to those obtained via blood samples, Roca said.

“You can explore the connectivity of different elephant populations, the level of genetic diversity, the level of inbreeding and relatedness among elephants,” he said. “And I would say there are lots of reasons you don’t want to have to collect blood samples from wild elephants.”

“It’s possible to do what you could do with blood, but it goes beyond that,” de Flamingh said. “You now can do analyses that you couldn’t do before with blood DNA, which only provides information about the elephant’s genome.”

De Flamingh is a postdoctoral researcher and Malhi and Roca are professors at the Carl R. Woese Institute for Genomic Biology at the U. of I.

The International Fund for Animal Welfare, the Conservation Ecology Research Unit of the University of Pretoria, and the U.S. Fish and Wildlife Service African Elephant Conservation Fund supported this research.

The paper “Combining methods for non-invasive fecal DNA enables whole genome and metagenomic analyses in wildlife biology” is available to members of the media from the U. of I. News Bureau. 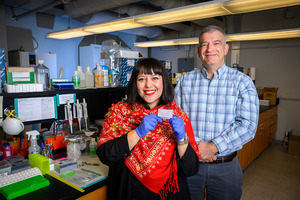 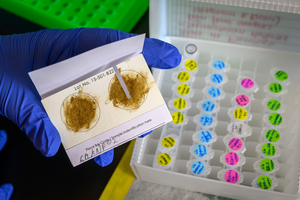 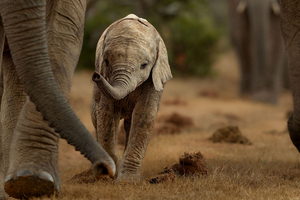 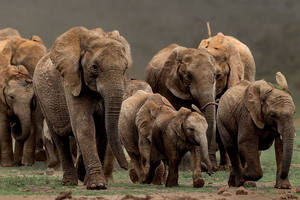