In this study, a pre-deposited Mo film as a precursor was transformed to 2D MoTe2 layer via vdW growth mechanism through a direct thermal-assisted tellurization process. As a matter of fact, the phase transition of MoTe2 is highly dependent on the growth time. By controlling the growth time, 2-inch 2H and 1Tʹ- MoTe2 layers with good uniformity were obtained, respectively. By virtue of the facile and scalable thermal-assisted tellurization strategy, the thickness of the 2D MoTe2 layers can be precisely tailored by tuning the initial Mo film thickness.

The vdW growth of the large-area 2D MoTe2 layers offers more flexibility for the development of high-sensitivity optoelectrical devices. In light of this, a 1Tʹ-MoTe2/Si vertical Schottky junction device was developed by the in-situ vdW growth of 1Tʹ-MoTe2 layers on a pre-patterned Si substrate. To ensure the efficient carrier collection, monolayer graphene was selected as a top transparent contact with 1Tʹ-MoTe2 layer. The photodetector demonstrates high-sensitive self-powered ultrabroadband detection performance with a detection range of up to 10.6 µm and a large room-temperature specific detectivity of over 108 Jones in the mid-infrared (MIR) range. The obtained room-temperature specific detectivity is superior to the most 2D material-based IR detectors and some commercial detectors.

Given the superior IR detection capability of the photodetector, the room-temperature IR imaging was further explored with the Gr/1Tʹ-MoTe2/Si Schottky junction device. The photocurrent mapping image of "LWIR" pattern with a large current contrast ratio over 10 and sharp edges was obtained from an individual detector under the IR illumination of 10.6 μm at room temperature. Furthermore, the large-scale uniform 2D MoTe2 layer enables the fabrication of an 8 × 8 1Tʹ-MoTe2/Si Schottky junction device array for IR imaging application. Upon MIR laser illumination, the large difference between the currents of the exposed and unexposed pixels results in a high-resolution heart-shaped image with large current ratios of 100, 68, and 51 for 3.0, 4.6, and 10.6 μm laser illumination at room-temperature, respectively. Such excellent room-temperature imaging capability with good homogeneity of the device array makes this finding great promise for MIR imaging applications. The wafer-scale growth of 2D MoTe2 layers compatible with Si technology shows great potential for next-generation on-chip Si CMOS systems with low-power consumption and low-cost production. 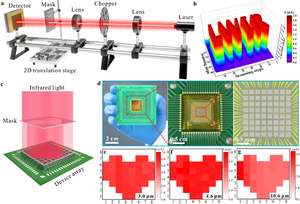 MIR imaging application of the photodetector.