While studying a nearby pair of merging galaxies using the Atacama Large Millimeter/submillimeter Array (ALMA)— an international observatory co-operated by the U.S. National Science Foundation’s National Radio Astronomy Observatory (NRAO)— scientists discovered two supermassive black holes growing simultaneously near the center of the newly coalescing galaxy. These super-hungry giants are the closest together that scientists have ever observed in multiple wavelengths. What’s more, the new research reveals that binary black holes and the galaxy mergers that create them may be surprisingly commonplace in the Universe. The results of the new research were published today in The Astrophysical Journal Letters, and presented in a press conference at the 241st meeting of the American Astronomical Society (AAS) in Seattle, Washington.

At just 500 million light-years away from Earth in the constellation Cancer, UGC4211 is an ideal candidate for studying the end stages of galaxy mergers, which occur more frequently in the distant Universe, and as a result, can be difficult to observe. When scientists used the highly sensitive 1.3mm receivers at ALMA to look deep into the merger’s active galactic nuclei— compact, highly luminous areas in galaxies caused by the accretion of matter around central black holes— they found not one, but two black holes gluttonously devouring the byproducts of the merger. Surprisingly, they were dining side-by-side with just 750 light-years between them.

“Simulations suggested that most of the population of black hole binaries in nearby galaxies would be inactive because they are more common, not two growing black holes like we found,” said Michael Koss, a senior research scientist at Eureka Scientific and the lead author of the new research.

Koss added that the use of ALMA was a game-changer, and that finding two black holes so close together in the nearby Universe could pave the way for additional studies of the exciting phenomenon. “ALMA is unique in that it can see through large columns of gas and dust and achieve very high spatial resolution to see things very close together. Our study has identified one of the closest pairs of black holes in a galaxy merger, and because we know that galaxy mergers are much more common in the distant Universe, these black hole binaries too may be much more common than previously thought.”

If close-paired binary black hole pairs are indeed commonplace, as Koss and the team posit, there could be significant implications for future detections of gravitational waves.

Ezequiel Treister, an astronomer at Universidad Católica de Chile and a co-author of the research said, “​​There might be many pairs of growing supermassive black holes in the centers of galaxies that we have not been able to identify so far. If this is the case, in the near future we will be observing frequent gravitational wave events caused by the mergers of these objects across the Universe.”

Pairing ALMA data with multi-wavelength observations from other powerful telescopes like Chandra, Hubble, ESO’s Very Large Telescope, and Keck added fine details to an already-compelling tale. “Each wavelength tells a different part of the story. While ground-based optical imaging showed us the whole merging galaxy, Hubble showed us the nuclear regions at high resolutions. X-ray observations revealed that there was at least one active galactic nucleus in the system,” said Treister. “And ALMA showed us the exact location of these two growing, hungry supermassive black holes. All of these data together have given us a clearer picture of how galaxies such as our own turned out to be the way they are, and what they will become in the future.”

So far, scientists have mostly studied only the earliest stages of galaxy mergers. The new research could have a profound impact on our understanding of the Milky Way Galaxy’s own impending merger with the nearby Andromeda Galaxy. Koss said, “The Milky Way-Andromeda collision is in its very early stages and is predicted to occur in about 4.5 billion years. What we’ve just studied is a source in the very final stage of collision, so what we’re seeing presages that merger and also gives us insight into the connection between black holes merging and growing and eventually producing gravitational waves.”

"This fascinating discovery shows the power of ALMA and how multi-wavelength astronomy can generate important results that expand our understanding of the universe, including black holes, active galactic nuclei, galaxy evolution and more," says Joe Pesce, NSF program director for the National Radio Astronomy Observatory. "With the advent of gravitational wave detectors, we have an opportunity to expand our observational powers even further by combining all these capabilities. I don't think there's really a limit to what we can learn."

The National Radio Astronomy Observatory (NRAO) is a facility of the National Science Foundation, operated under cooperative agreement by Associated Universities, Inc.

UGC 4211: A confirmed dual AGN in the local universe at 230 pc nuclear separation 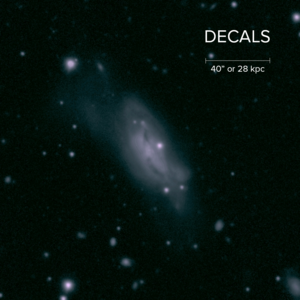 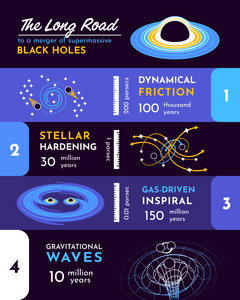 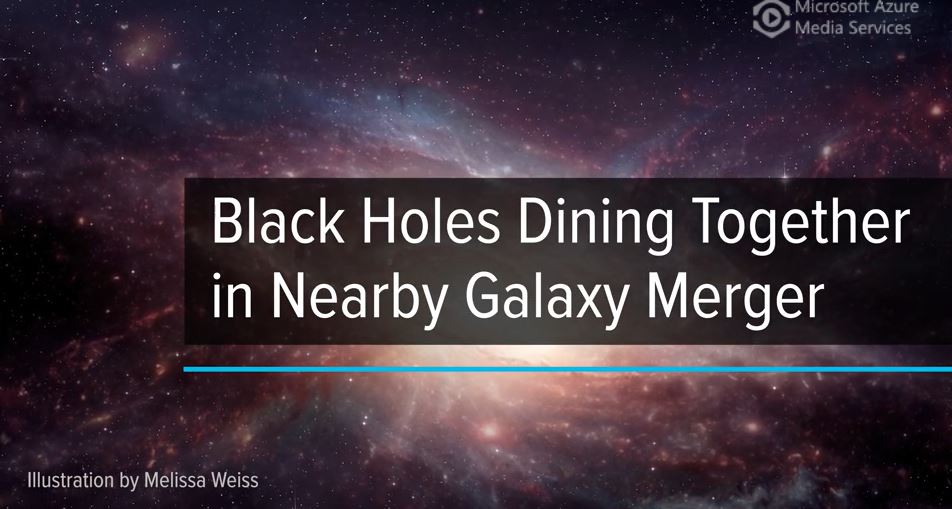 Black Holes Dining Together in Nearby Galaxy