When an outbreak of sylvatic plague decimated black-tailed prairie dog numbers in the Thunder Basin National Grassland in 2017, researchers saw an opportunity for a “natural experiment” to explore the impact of the rodents’ die-off on the plants and other wildlife in that area of northeast Wyoming.

What they learned was that the decline in prairie dogs, along with abnormally high precipitation in 2018, combined to bring about dramatic ecosystem changes. The findings highlight the serious conservation challenges caused by boom-and-bust disease cycles in remaining Great Plains grasslands, the researchers say.

“We found that prairie dogs play a critical role for associated vegetation and wildlife communities in this system, creating important grassland habitat for numerous species while serving as prey for several predators,” says Courtney Duchardt, an assistant professor in Oklahoma State University’s Department of Natural Resource Ecology and Management who led the research as a University of Wyoming Ph.D. student in ecology. “Our research highlights how precipitation can interact with disease-induced loss of a keystone species to induce drastic and rapid shifts in wildlife communities.”

The research is published in Ecological Applications, a journal of the Ecological Society of America that focuses on applications of ecological science to environmental problems. Others involved were Professor Jeff Beck, Associate Professor Derek Scasta and former graduate student Lauren Connell, all of UW’s Department of Ecosystem Science and Management; Ana Davidson, of Colorado State University; Jacob Hennig, of the U.S. Geological Survey; David Augustine and Lauren Porensky, of the U.S. Department of Agriculture; and David Pellatz, of the Thunder Basin Grasslands Prairie Ecosystem Association.

Black-tailed prairie dogs now occupy a small fraction of their historical range and are considered a nuisance in some areas because of their capacity to compete with livestock for forage. They also are highly susceptible to sylvatic plague, a nonnative pathogen introduced to North America in the early 1900s. The combined pressures of disease, habitat loss and control efforts that have reduced populations of the rodent also have resulted in declines in associated wildlife species. Those include birds such as burrowing owls, mountain plovers and raptors, as well as swift foxes, coyotes and badgers.

This study, conducted from 2015-19 in the Thunder Basin grassland, may be the first to specifically examine the multispecies impacts of a wide-scale plague outbreak, which reduced the area covered by prairie dog colonies from nearly 25,000 acres to only about 125 acres in the study area. The 2017 outbreak was followed by abnormally high precipitation in 2018, which caused vegetation to grow quickly and taller without the presence of prairie dogs.

The researchers found that the mountain plover, birds that thrive when vegetation is kept shorter by prairie dogs, almost disappeared from the study area, while migrant songbirds such as the lark bunting, which prefer taller vegetation, increased in number.

Meanwhile, species including ferruginous hawks, badgers and swift foxes declined dramatically as their prey base crashed.

The researchers say that, while plants and animals in Great Plains grasslands historically have been subject to variations in precipitation and other factors, the boom-and-bust cycles are likely to “destabilize” the ecosystems further. That could even be a challenge for livestock managers.

The scientists suggest that further efforts to predict prairie dog boom-and-bust cycles will help support the compatibility of managing rangelands for both livestock and biodiversity conservation. 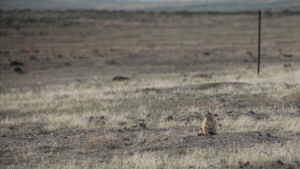