Research led by Queen Mary University of London, King’s College London and the Francis Crick Institute has identified a protein that makes melanoma, the most serious type of skin cancer, more aggressive by giving cancer cells the ability to change the shape of their nucleus – a characteristic which allows the cells to migrate and spread around the body.

The study, published today in Nature Cell Biology, modelled the behaviour of aggressive melanoma cells that are able to change the shape of their nucleus to overcome the physical constraints that cancer cells encounter when they migrate through tissues. The study found that these aggressive melanoma cells harboured high levels of a protein called LAP1 and that increased levels of this protein were linked to poor prognosis in melanoma patients.

Melanoma is a type of skin cancer that can spread to other organs in the body. Cancer spread or ‘metastasis’ is the leading cause of cancer-related deaths. While metastasis has been extensively studied, the mechanisms by which it occurs are poorly understood. The findings from the study shed new light on a mechanism of melanoma progression and could pave the way for the development of new ways to target melanoma spread.

The study was co-led by Professor Victoria Sanz-Moreno from Queen Mary’s Barts Cancer Institute and Dr Jeremy Carlton from King’s College London and The Francis Crick Institute, and primarily funded by Cancer Research UK, the Wellcome Trust and Barts Charity.

To metastasise, cancer cells need to break away from the primary tumour, travel to another part of the body and start growing there. However, the dense surroundings of a tumour make this physically difficult for cancer cells.

Cells contain a large, stiff structure called the nucleus that stores the cell’s genetic information, but which also restricts the ability of a cell to move through the tight gaps in the tumour’s environment. For cancer cells to squeeze through these gaps, they need to make their nucleus more malleable.

Imaging conducted after the migration experiments showed that the aggressive cells were able to move through the pores more effectively than the less-aggressive ones by forming bulges at the edge of their nucleus called ‘blebs’. Genetic analyses of the melanoma cells revealed that the aggressive cells that formed the blebs contained higher levels of the LAP1 protein, which sits within the membrane that surrounds the nucleus (called the nuclear envelope).

Dr Jeremy Carlton, whose laboratory is interested in understanding the dynamics of membrane-bound structures within cells, said:

“The nuclear envelope is tethered to the underlying nucleus, and our investigations show that the LAP1 protein loosens this tethering, allowing the nuclear envelope to bulge away and form blebs that make the nucleus more fluid. As a result, the cancer cells could squeeze through gaps that would normally stop them.”

When the team blocked the production of the LAP1 protein in aggressive cells and re-challenged them to migrate through pores in laboratory experiments, they found that the cells were less able to form nuclear envelope blebs and less able to squeeze through these gaps.

The team also observed the same pattern of LAP1 expression in melanoma samples from patients. LAP1 levels were higher in tissue samples taken from sites of metastasis in melanoma patients compared to the levels found in primary tumours. The patients that had high levels of LAP1 in the cells around the edge of the primary tumour had more aggressive cancer and poorer outcomes, suggesting that the protein could be used to identify subpopulations of melanoma patients that may be at higher risk of aggressive disease.

Professor Sanz-Moreno, whose research group is interested in understanding how cancer cells communicate with their environment to promote their growth and spread, said:

“Melanoma is the most aggressive and deadly type of skin cancer. By combining the expertise of my laboratory with that of Dr Carlton’s, we have gained new mechanistic understanding of how LAP1 contributes to melanoma progression, and have shown that LAP1 is a key regulator of melanoma aggressiveness in laboratory and patient models.”

“Because LAP1 is expressed in such high levels in metastatic cells, interfering with this molecular machinery could have a big impact on cancer spread. There are currently no drugs that target LAP1 directly, so looking to the future we would like to investigate ways to target LAP1 and nuclear envelope blebbing to see if it is possible to block this mechanism of melanoma progression.”

The team would like to investigate whether nuclear envelope blebbing driven by LAP1 occurs in other cells that make up and move through a tumour’s environment, such as immune cells, to determine if this process in other cells helps or hinders the progression of cancer.

“Studies like this one are a perfect example of why Cancer Research UK is passionate about funding research that furthers our knowledge of what cancer does to the biology of our bodies, in addition to research that focuses on what’s happening in the clinic.

This new understanding of how the nucleus of a melanoma cell can become more fluid to move around the body is useful for building our knowledge of how cancer works and opens up a new avenue of investigation into ways to make it harder for cancer to spread.”

The first author of the study, Dr Yaiza Jung, conducted the work as part of her PhD funded by The Francis Crick Institute and King’s College London. 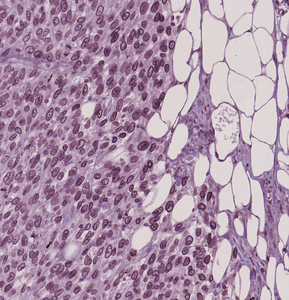