A new publication from Opto-Electronic Science; DOI  10.29026/oes.2022.220021  considers whether nanowire LEDs can be the ultimate light engine for AR and VR displays.

Nanowire LEDs show a great potential for achieving high-resolution density and high EQE at the same time. Since each pixel is formed by submicron nanowire array, the efficiency of the nanowire LED is independent of pixel size. In 2018, Aledia reported a nanowire LED whose EQE is independent of pitch size when the pitch size is reduced from 1000 μm to 5 μm. Among different nanowire structures, InGaN/GaN dot-in-wire hexagonal LED is attractive because its emission wavelength can be controlled by the wire diameter and its electrical performance is excellent. The former feature significantly reduces the fabrication difficulties. However, these nanowires exhibit different angular radiation patterns for the red, green and blue colors in the far-field, leading to a noticeable angular color shift. Additionally, directional light engine is preferred since the accepting cone in AR/VR imaging system is typically within ±20°. Therefore, the geometry of the nanowire should be optimized to achieve matched radiation patterns for the three primary colors, high light extraction efficiency (LEE), and narrow angular luminance distribution simultaneously.

The authors of this article optimized the InGaN/GaN nanowire LED geometry by 3D dipole cloud through a commercial wave optics simulation software Finite-Difference Time-Domain (FDTD, Ansys inc.). They propose a multicolor hexagonal single InGaN/GaN dot-in-nanowire LED model based on Ra’s experimental results. They set 3D large box monitor and small box monitor to calculate the emission power and dipole power, respectively, which defines the light extraction efficiency (LEE) by their ratio. Besides, the far-field distribution map is captured by a 2D power monitor placed above the structure. As indicated in Fig. 1(b), due to the hexagonal symmetry, they simulate two groups of dipoles which are defined by inscribed circle and circumscribed circle, respectively. The emission wavelength of the dipole sources follows the unfiltered measured emission spectra (solid lines in Fig. 1(c)).  All the three nanowires without color filters have side lobe emission since the Indium adatom diffusion is difficult to be perfectly controlled. As indicated in the dashed lines in Fig. 1(c), this side lobe emission is suppressed dramatically after applying color filters.

By considering the AR imaging system accepting cone, the authors define the effective LEE to be the LEE within ±20°. After optimization, the effective LEE of blue, green, and red nanowire LEDs increases from [9.3%, 18.8%, 30.6%] to [10.0%, 25.6%, 33.0%], respectively. In comparison with the size-dependent blue and green InGaN µLED and assuming 100% of the produced light can be coupled into the imaging system, their blue nanowire LED shows a better performance than µLED whose mesa size is smaller than 10 µm as shown in Fig. 3(a). In addition, Fig. 3(b) indicates that the effective LEE of green nanowire LEDs is even higher than that of the 80-µm µLED. Compared to AlGaInP red µLEDs, their red nanowire LED is more efficient than that with 20-µm chip size (Fig. 3(c)). Remarkably, in comparison with the 10-µm mesa size, the blue nanowire LED provides a similar brightness, while green and red nanowire LEDs can offer 1.6x and 1.4x higher efficiency, respectively. Therefore, nanowire LEDs show a pronounced higher efficiency than µLED under small pixel size and high-resolution density.

More information can be found at: https://lcd.creol.ucf.edu/

Opto-Electronic Science (OES) is a peer-reviewed, open access, interdisciplinary and international journal published by The Institute of Optics and Electronics, Chinese Academy of Sciences as a sister journal of Opto-Electronic Advances (OEA, IF=9.682). OES is dedicated to providing a professional platform to promote academic exchange and accelerate innovation. OES publishes articles, reviews, and letters of the fundamental breakthroughs in basic science of optics and optoelectronics.

Submission of OES may be made using ScholarOne (https://mc03.manuscriptcentral.com/oes)

Will nanowire LEDs be the ultimate light engine for AR and VR displays? 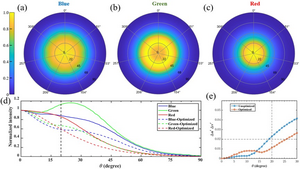