The Disease Blood Atlas highlights 1,463 proteins associated with 12 different types of cancer, and presents proteins that can be used to identify individual cancer types based on a drop of blood.

The new database was produced by the Human Protein Atlas consortium, led by Uhlén and based within SciLifeLab, a joint research center that includes KTH Royal Institute of Technology, Uppsala University, Karolinska Institutet and Stockholm University.

Uhlén says that the Disease Blood Atlas was compiled from measurements of minute amounts of blood plasma collected from 1,400 cancer patients at the time of diagnosis and before treatment. The blood samples underwent a combination of statistical analysis of gene expression and machine-learning-based disease prediction.

“This is a novel pan-cancer strategy for exploring the proteome signature in blood from cancer patients,” he says.

The release marks the 22nd version of the open-access Human Protein Atlas, a resource for profiling human proteins (www.proteinatlas.org), which contains 12 sections each exploring the human proteins from different angels, including the new Disease Blood Atlas and the Protein 3-D Structure sections.

The release is accompanied by 5 million pages of updates in the Human Protein Atlas’ databases of tissues and cell lines.

The Protein 3-D Structure section shows the 3-D structures for all human proteins using an AI-based prediction model (AlfaFold). In addition, a major update of the Tissue Atlas section provides detailed multiplex spatial profiling of proteins specific for human testis and kidney. More data is also provided on single cell analysis of tissues and organs, as well as data from an extensive catalogue of human cell lines.

”We believe that the new sections of the open access Human Protein Atlas with large amounts of novel data covering all human proteins provides new dimensions of valuable information for researchers interested in human biology and disease,” Uhlén says.

The work was funded by the Knut and Alice Wallenberg Foundation 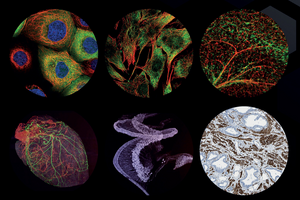 Images from the Human Protein Atlas