A short biography of pioneering scientist Mary Anning, written in the final ten years of her life, has been made public for the very first time.

Penned by George Roberts (1804–1860), who ran a private school opposite Anning’s fossil shop in Lyme Regis, and preserved in the Special Collections of the University of Bristol Library, the work has been published by Dr Michael Taylor of National Museums Scotland and University of Leicester and Professor Michael Benton of Bristol’s School of Earth Sciences.

Mary Anning (1799–1847) of Lyme Regis has been the subject of recent books and films, such as Tracy Chevalier’s Remarkable Creatures, and Ammonite, in which she was portrayed by Kate Winslet, because of her importance in the early days of palaeontology. She collected some of the first marine reptiles – ichthyosaurs and plesiosaurs – from the Jurassic period of the Dorset coast. Noted professors relied on her work to provide insights into the life of the past.

Mary Anning has become an icon of the often-forgotten contributions of women to science, and the campaign to get children, especially girls, interested in geology. But, in her day, she was a curiosity, another poor person in the Regency seaside resort of Lyme Regis.

“When the Library sent me a copy of the four-page manuscript, I found that it was based partly on a passage in Roberts’s history of Lyme Regis,” said Dr Taylor. “Roberts wrote books like ‘The Beauties of Lyme Regis’ for tourists, and he collected interesting pieces of information. We were able to confirm Anning expert Hugh Torrens’s suggestion that it was by Roberts, by identifying Roberts’s handwriting, and comparing the corrections and even a mistake with a particular date which Roberts had handwritten into his own copy of his history. So, it wasn’t just someone else copying from his book. It looks as if it was written as a dictionary entry or a section for a future book.”

“This memoir is valuable,” said Prof Benton. “One or two visitors to Lyme Regis mentioned Mary Anning and her little fossil shop, and she was obviously widely known to natural scientists in London, Bristol, Oxford, and Cambridge. But normally they would not enquire into her life in any detail. Admittedly though, when she died at the relatively young age of 48, she had obituaries in various papers and scientific journals.”

Dr Taylor said: “These short obituaries were often copied from one written by George Roberts. George Roberts lived in Lyme Regis and met her many times. He describes how she was struck by lightning as a baby, and then how at the age of about ten she began collecting fossils, and how she sold her first find, an ammonite to a passing lady in the street for half a crown.”

There are further details of her discoveries of fossil reptiles, including the first ichthyosaur fossil studied by scientists. It was described by Sir Everard Home in 1818. Mary Anning was granted a government annuity of £25 per year in 1836 thanks to an intervention by Fellows of the Geological Society of London, and she died of breast cancer in 1847.

“We dated the manuscript as written some time in 1837–47,” added Dr Taylor, “because there is an ‘1837’ watermark in the paper, and Anning was described as a ‘living worthy’. Later,  Roberts took the manuscript, deleted mention of Anning as alive, and added information on her death to make it into an obituary, presumably just after she died. But it seems never to have been published at its full length.”

Prof Benton concluded: “We are very pleased that we are able to publish the document in full.

“In the paper, we show detailed photographs of all four pages of the document, as well as our reading of the various versions and modifications. George Roberts was the locally-based author who reported the news from Lyme Regis to various newspapers and wrote his own books, so it makes complete sense that he would have written about Mary Anning as a well-known celebrity of the town.”

‘The life of Mary Anning, fossil collector of Lyme Regis: a contemporary biographical memoir by George Roberts’ by Michael A. Taylor and Michael J. Benton in Journal of the Geological Society.

Journal of the Geological Society

Journal
Journal of the Geological Society 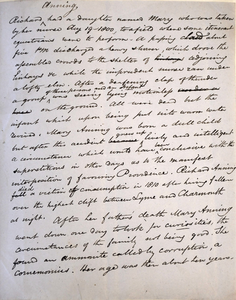