In a new study, a team of astronomers led by Haojing Yan at the University of Missouri used data from NASA’s James Webb Space Telescope (JWST) Early Release Observations and discovered 87 galaxies that could be the earliest known galaxies in the universe.

The finding moves the astronomers one step closer to finding out when galaxies first appeared in the universe — about 200-400 million years after the Big Bang, said Yan, associate professor of physics and astronomy at MU and lead author on the study.

“Finding such a large number of galaxies in the early parts of the universe suggests that we might need to revise our previous understanding of galaxy formation,” Yan said. “Our finding gives us the first indication that a lot of galaxies could have been formed in the universe much earlier than previously thought.”

In the study, the astronomers searched for potential galaxies at “very high redshifts.” Yan said the concept of redshifts in astronomy allows astronomers to measure how far away distant objects are in the universe — like galaxies — by looking at how the colors change in the waves of light that they emit.

Yan said Edwin Hubble’s discovery in the late 1920s that our universe is ever-expanding is key to understanding how redshifts are used in astronomy.

“Hubble confirmed that galaxies external to our Milky Way galaxy are moving away from us, and the more distant they are, the faster they are moving away,” Yan said. “This relates to redshifts through the notion of distances — the higher the redshift an object is at, such as a galaxy, the further away it is from us.”

Therefore, Yan said the search for galaxies at very high redshifts gives astronomers a way to construct the early history of the universe.

“The speed of light is finite, so it takes time for light to travel over a distance to reach us,” Yan said. “For example, when we look at the sun, we aren’t looking at it what it looks like in the present, but rather what it looked like some eight minutes ago. That’s because that’s how long it takes for the sun’s radiation to reach us. So, when we are looking at galaxies which are very far away, we are looking at their images from a long time ago.”

Using this concept, Yan’s team analyzed the infrared light captured by the JWST to identify the galaxies.

“The higher the redshift a galaxy is at, the longer it takes for the light to reach us, so a higher redshift corresponds to an earlier view of the universe,” Yan said. “Therefore, by looking at galaxies at higher redshifts, we are getting earlier snapshots of what the universe looked like a long time ago.”

The JWST was critical to this discovery because objects in space like galaxies that are located at high redshifts — 11 and above — can only be detected by infrared light, according to Yan. This is beyond what NASA’s Hubble Space Telescope can detect because the Hubble telescope only sees from ultraviolet to near-infrared light.

“JWST, the most powerful infrared telescope, has the sensitivity and resolution for the job,” Yan said. “Up until these first JWST data sets were released [in mid-July 2022], most astronomers believed that the universe should have very few galaxies beyond redshift 11. At the very least, our results challenge this view. I believe this discovery is just the tip of the iceberg because the data we used only focused on a very small area of the universe. After this, I anticipate that other teams of astronomers will find similar results elsewhere in the vast reaches of space as JWST continues to provide us with a new view of the deepest parts of our universe.”

“First batch of z ≈ 11–20 candidate objects revealed by the James Webb Space Telescope Early Release Observations on SMACS 0723-73,” was published in The Astrophysical Journal Letters. Co-authors are Chenxiaoji Ling at MU; Zhiyuan Ma at the University of Massachusetts-Amherst; and Cheng Cheng and Jia-Sheng Huang at the Chinese Academy of Sciences South America Center for Astronomy and National Astronomical Observatories of China.

Searching for the earliest galaxies in the universe 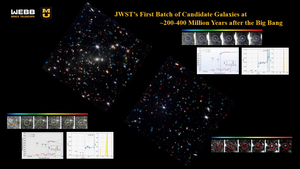