CORVALLIS, Ore. – Consumers are willing to pay more for familiar, versus unfamiliar, varieties of cheese if there is a sticker on the cheese indicating it won an award or if sensory information about the cheese – such as a description of its taste or food pairing suggestions – is included, a new study from Oregon State University shows.

The study also identified two broad groups of consumers whose cheese buying preferences differ. A group that prefers unfamiliar foods is willing to pay a premium for unfamiliar cheeses and an award sticker plays a much more important role than sensory information. The opposite is true for consumers who prefer familiar cheese varieties: sensory information play a much stronger role in willingness to pay more.

For example, specialty food products such as wine or cheese that are made on a small scale and have traditionally relied on in-person recommendations or product sampling might be more in need of new marketing strategies because online shopping can’t provide a real-time, in-person tasting experience.

“This is an under-studied area that is growing in importance, especially as people shift to buying groceries online and as subscription food boxes grow in popularity,” said Nadia Streletskaya, an assistant professor of applied economics at Oregon State. “Our study can help specialty food producers, many of whom operate on a small scale with limited budgets, determine best ways to promote their products.”

The researchers expect that the patterns they found with artisan cheese consumers could hold for buyers of other specialty foods, such as wine or different milk types, but more research is needed to make that conclusion.

For the study, the researchers evaluated how sensory information and the presence of award labels affected consumer demand for two familiar (brie, cheddar) and two unfamiliar (Coulommiers, Cantal) varieties of artisanal cheeses in the U.S. A total of 488 artisanal cheese consumers from two regions – 270 from Corvallis, Oregon and 218 from Ithaca, New York – took part in the online study.

The award sticker and sensory information were chosen because they are common and relatively low-cost promotional strategies that translate well to the online retail environment.

After being shown the images, participants were asked to select which cheese they preferred to purchase. They also had an option to make no purchase.

“I would say the biggest takeaway of the study for the industry is to think about what type of consumer you are trying to attract and to adjust your promotional plans to match what they are looking for,” said Streletskaya, whose research broadly looks at how food labeling impacts consumer demand.

Also a factor, she said, is that sensory descriptions can be costly, depending on the retail outlet, while award stickers can be more easily incorporated in the packaging design,

The research was supported by an OSU Dairy Foods Innovation Fund. 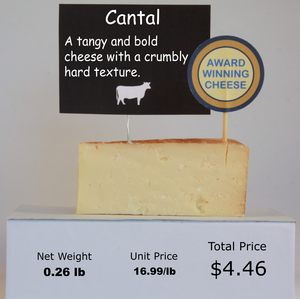