Researchers at Ruhr University Bochum, Germany, have discovered a new synthetic pathway with which they can produce a specific organic compound from the simple molecule carbon monoxide (CO), namely anionic ketenes. These were previously only known as reactive intermediates, and therefore couldn’t be used as defined reagents. The Bochum-based researchers produced anionic ketenes that were so stable that they could be isolated. Unlike previous methods, which can produce higher-value compounds from simple molecules, this approach doesn’t require any expensive or toxic metals.

Mike Jörges, Felix Krischer and Professor Viktoria Däschlein-Gessner from the Ruhr Explores Solvation (RESOLV) Cluster of Excellence published their findings in the journal Science from 22 December 2022.

“Small molecules such as hydrogen, carbon dioxide or carbon monoxide often occur as by-products of large-scale technical processes or are easily accessible from renewable raw materials,” explains Däschlein-Gessner. “Since they are readily available, they are of interest as synthesis building blocks to obtain essential feedstock or fine chemicals such as agrochemicals or pharmaceuticals. It’s a promising avenue for the development of sustainable synthesis processes.”

In order to activate small molecules and convert them into more complex compounds, it is usually necessary to utilise certain metals that are known as transition metals because of their position in the subgroups of the periodic table. These are often precious metals, which are less abundant and sometimes toxic. To date, only a few compounds from the widely available main group elements have been able to activate small molecules. This also applies to carbon monoxide. Moreover, reactions with CO as a building block have been less selective: in addition to the desired high-value compounds, unwanted by-products are often formed.

The researchers from the Chair of Inorganic Chemistry II at Ruhr University Bochum have now used simple phosphorus compounds, i.e. so-called ylides, in combination with sodium or potassium bases to tackle this challenge. By realizing a previously unknown transition metal-like reaction mode of these carbon compounds, they enabled the efficient incorporation of CO into larger molecules with a high degree of selectivity.

“The selectivities of these transformations are impressive, especially compared to other synthesis methods,” points out Viktoria Däschlein-Gessner. “This is due to the stability of the anions, resulting from their unique electronic structure. They can be specifically converted with other molecules just like in a molecular model kit, which means that different, complex structures can be rapidly built up.”

In the next step, the Bochum group intends to explore the reaction principle and the potential of the anionic ketenes in further research directions. “The reaction mode of the phosphorus compounds is ground-breaking for developing further processes to utilise sustainable building blocks such as CO,” stresses Däschlein-Gessner. “We are also certain that the anionic ketenes have even greater potential for synthetic chemistry than we’ve shown to date.”

Novel synthesis process for a sustainable use of small molecules 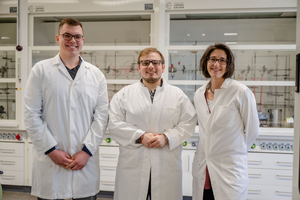