They called it Legionella bononiensis: it is the 64th species of Legionella identified worldwide, the second to be isolated in Italy since the discovery of the pathogen. It was discovered in 2019 in a hotel facility by researchers from the Laboratory of Environmental Microbiology and Molecular Biology (MAb) at the University of Bologna.

The MAb Laboratory, based at the Department of Biological, Geological, and Environmental Sciences of the University of Bologna, is involved in the environmental surveillance of Legionella bacteria, the bacterial species that causes legionellosis, a disease that mainly affects the respiratory tract. This activity is carried out by combining traditional techniques and state-of-the-art molecular methods, such as mass spectroscopy, gene sequencing and the latest Next Generation Sequencing (NGS) techniques.

“During planned surveillance activities in a hotel facility, the laboratory staff isolated atypical colonies, which had peculiar morphological and phenotypical characteristics,” explains Sandra Cristino, researcher at the University of Bologna and head of the MAb Laboratory. “We analysed the collected samples using all the standardised methods suggested by reference standards, as well as the scientific literature. However, the results obtained were discordant and did not allow the identification of bacteria at a species level.”

To obtain more precise answers, the researchers then turned to genetic sequencing, the reference test for identifying microorganisms isolated environmentally or clinically. The results linked the discovered bacteria to a reference strain of the Legionella quateirensis species.

Yet, it was not a definitive answer: further investigation was needed. The scholars then further delved into the sequencing activity by analysing other Legionella-specific genes. In addition to these studies, scholars conducted phenotyping (i.e., analysis of the characteristics of the microorganism), Whole Genome Sequencing (a technology that allows the sequencing of the entire genome) and mass spectroscopy with MALDI-TOF technology (which allows the identification of pathogenic microorganisms with great accuracy) studies.

“The obtained results confirmed what we had observed in culture: we were dealing with a new species, phylogenetically distant from Legionella quateirensis, which has never been documented in scientific literature,” Cristino continues. "We then began the process of officially recognising the strain by depositing samples at two culture collections in two different countries, as required by the leading journal that allows the description of new species of prokaryotes.”

Culture collections are collections of microbial cultures where pure microbial strains are deposited to ensure their preservation and maintenance. They are important resources for the work of researchers in the medical and life sciences fields. The new Legionella bacterium was officially deposited in two of the world's most prestigious culture collections: the American Type Culture Collection (ATCC), in the United States, and the Leibniz-Institute DSMZ-German Collection of Microorganisms and Cell Cultures (DSMZ), in Germany.

The official recognition of the strains made it possible to send the results obtained to the International Journal of Systematic and Evolutionary Microbiology (IJSEM), the internationally recognised scientific journal for the registration of new species. Given the location of the new bacterial strain, scientists proposed the name Legionella bononiensis, and after about a year of review by the commission that safeguards the appropriateness of the name assigned to the new species, the recognition of the scientific community finally arrived.

The research team of the University of Bologna officially announced the discovery of the new species during the 10th International Legionella Congress held in Yokohama, Japan. This work is part of the research line of the 35th cycle of the PhD programme in Earth, Life and Environmental Sciences (STVA) of the Department of Biological, Geological and Environmental Sciences of the University of Bologna. PhD student Luna Girolamini is the first author of the publication in the International Journal of Systematic and Evolutionary Microbiology (IJSEM).

Meanwhile, the work of the scientists at the Laboratory of Environmental Microbiology and Molecular Biology (MAb) does not stop. “It is essential to continue studying the pathogenicity and infectivity of the newly discovered strain, as well as the pattern of antibiotic resistance, in order to be able to carry out public health prevention activities,” Cristino confirms. “In addition, the lab is working on two new isolates, which turn out to be two new species of the genus Legionella.”

Legionella bononiensis: a new Legionella species has been identified 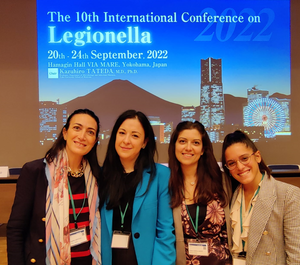