The American Mathematical Society has selected the Bridge to Math Doctorate program at The University of Texas at Arlington for its 2023 Mathematics Programs That Make a Difference Award.

The annual award recognizes programs that increase the number of students from groups historically underrepresented in advanced mathematical degree programs, including racial and ethnic minorities, women, low-income students and first-generation college students. UTA representatives received the award at a ceremony in Boston on Jan. 4.

“It is so gratifying to see our yearslong effort to expand access to higher education recognized at the national level. This is a tremendous honor,” said Jianzhong Su, professor and Mathematics Department chair. “Even more rewarding is watching our students grow and flourish as they apply mathematics to a number of important societal issues.”

Su said the award reflects a collaborative effort by UTA faculty, staff and students, including:

Founded in 2016 with support from the National Science Foundation, UTA’s Bridge program provides one year of advanced courses and faculty mentoring to strengthen students’ mathematical and academic skills as they prepare for doctoral studies.

The program targets students who demonstrate the talent and commitment to achieve a doctoral degree, but who are not yet ready to succeed in a standard doctoral program for reasons such as coming from an underserved institution, where advanced mathematics courses may not be available, Su said.

“We see a lot of underrepresented minority students and students from minority-serving institutions who are quite talented, but for various reasons, haven’t had access to the type of mathematical training that large research institutions offer,” Su said. “Students from institutions with limited research opportunities are those we can serve especially well.”

Over six years, the program has supported 42 fellows. To date, 94% of its participants have entered graduate programs at research universities, including Harvard, Virginia Tech and UTA.

His research also addresses image blurring problems in MRIs, which are caused by several factors, including involuntary muscle movement, respiratory motion and technical difficulties. Blurred scans are difficult for physicians to interpret and can contribute to incorrect evaluations of a patient’s condition.

Johnson’s success demonstrates the Bridge program’s capacity to benefit not only its participants, but future generations of STEM learners, Su said.

Johnson said he supports education initiatives to increase the participation of people who are underrepresented in math and science fields in the U.S., including Black, Latino and Native American populations.

“There are many barriers to STEM education for people of color,” Johnson said. “I hope to influence students’ opinions about their abilities to pursue questions in math and science and apply their knowledge to solve real-world problems.” 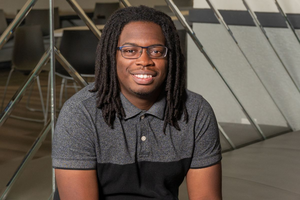